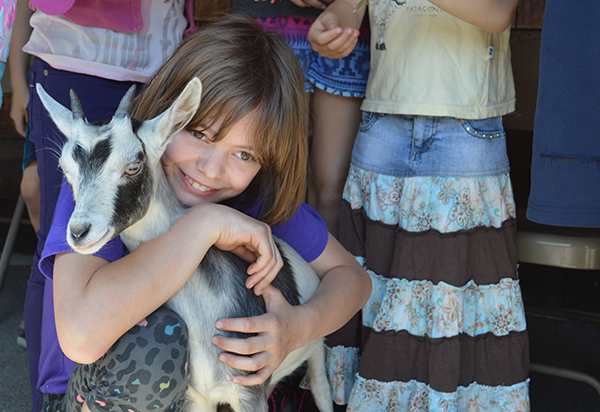 Some kids were about to sample a tea made from stinging nettles for the first time. “It tastes like seaweed!” one shouted. “Yum! Not bad,” another announced.

Fayston Elementary School (FES) students dabbled in herbal teas and medicines and a host of other activities for the school’s Farm Day on Thursday, May 26.

Food service director at FES and Waitsfield Elementary School (WES) Cheryl Joslin has been organizing this day for the past three years.

Students formed into groups of mixed ages, from kindergarten through sixth grade, and hopped around from station to station.

Along with nettle tea tastings, students explored several medicinal plants with herbalist Heidi Schmidt of Vineyard Sound Herbs in Waitsfield. They seemed to like the sweet, citrus scent and taste of lemon balm the most.

Constancia Gomez of La Lu Farm in Warren brought baby goats and chicks for students to interact with and chef Robert Kuiper of Sugarbush set up a pizza-making station where kids got to assemble their own pie and vote on their favorite toppings.

Cheese and bacon won by a landslide. Pineapple came close. One student voted for onion.

Students lunched on homemade pizzas and salad, chopped and tossed by younger students in a station that focused on sampling a variety of raw greens.

This station also included discussion of the difference between local and imported foods. Similarly, another station had students using a series of recipes and a map of local food growers and producers to determine how to prepare entire dishes with local foods alone.

A scavenger hunt based on the needs of a seed ensued outside, near a station where kids planted starter crops in newly constructed raised beds.

Cristal Vasseur had kids tasting maple syrups prepared in oil and wood-fired operations and challenging them to guess which was the Aunt Jemima imposter.

Students made maple cream cookies and looked at leaves on maple branches.

FES principal Jean Berthiaume said, “This day is a huge undertaking of chef Joslin and a testimony to the value of not belonging to a corporate food service program.”

“Chef Joslin works hard to make rich and meaningful connections with our area’s local food producers to provide a high-quality food service program for our students,” he added.