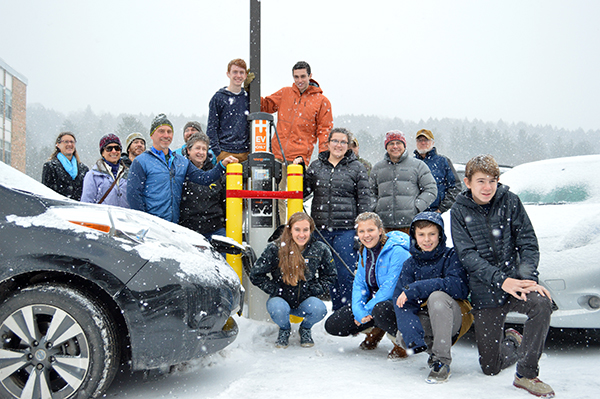 Environmentally conscious Harwood students can finally charge their cars in the school’s parking lot while they sit in class.

Efforts to install an electric vehicle (EV) charging station at the school came to fruition last Friday, December 9. Representatives from Washington Electric Co-op and Harwood Union High School gathered in the parking lot despite cold weather and snowy conditions to cut the ribbon and ceremonially open the charging station, although as the ribbon was cut, two cars were already plugged in.

It has been over a yearlong journey to install the Level 2 EV charging station and the students who have been waiting are certainly happy, braving the cold to come to the ribbon-cutting ceremony.

On October 21 2015, the school board voted to move forward with the project only to back out later on, unhappy with the negotiated contract. Washington Electric Co-op (WEC) offered to install the charger for free for Harwood. Harwood students and members of the community went back to the school board to make their case and on June 15 of this year the project was once again approved.

A new contract was written that both parties, Washington Electric Co-op and Harwood Union High School, are now happy with. Washington West Supervisory Union superintendent Brigid Scheffert Nease was originally worried about potential operational problems and ownership of the station.

Matt Henchen, a civics teacher at the school, teaches a Creating Sustainable Communities course. Some of his students worked on a service learning project that revolved around the debate over Harwood’s EV charging station.

“They wrote editorials, they showed up to school board meetings, they asked tough questions,” Henchen said of his students, and he said all of the credit for this project becoming a reality goes to all of the students who were so passionately involved.

This sentiment was echoed by David Frank, Fayston, who worked as a coordinator for the Harwood EV community advisory committee. He served as an intermediary between the school board and WEC to work through all the concerns that came up throughout the process.

Many attendees of the ceremony hope that Harwood has helped pave the way for other Vermont schools to install EV charging stations. Other than Harwood only two schools have them on their grounds. They hope that all of the issues that any school board may have have been worked through in Harwood's process.

They also hope that Harwood may consider adding more EV stations in the future if they see that the current one is being used often enough.