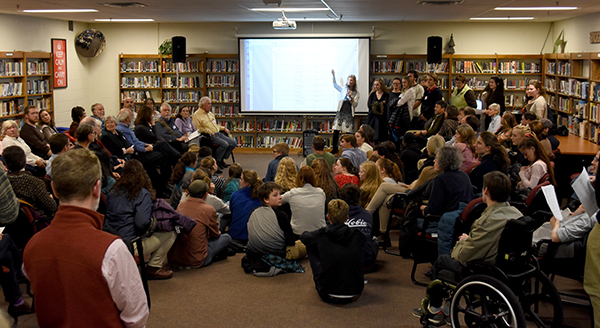 On Monday evening, November 13, students and community members filed into the Harwood library to ponder the question “How do we balance freedom and security in our democracy today?”

This question was the topic of the latest Socrates Cafe discussion group, a forum created by author and philosopher Christopher Phillips. Phillips, who now lives in Mexico, attended the cafe and was able to witness his popular cafe community in action.

Phillips developed the Socrates Cafe idea to provide communities with a way to delve into philosophical questions. This idea emerged from his childhood passion for inquiry, which evolved into his work with the Socratic method of group dialogue.

Socrates Cafes soon made their way to Harwood, where students quickly got on board with facilitating the dialogues. 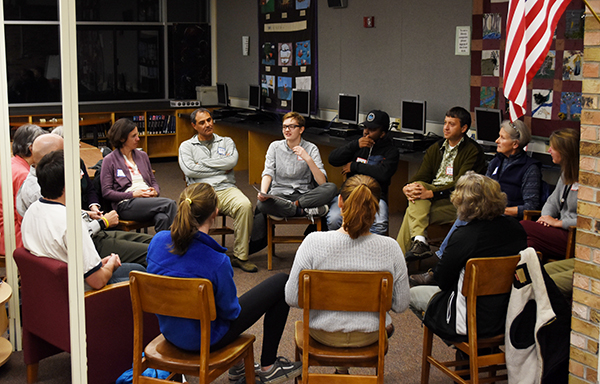 Harwood students and community members partake in a Socratic dialogue on Monday, November 13. Joining the group for this event on privacy and security in America, was Christopher Phillips, founder of the Socrates Cafe. Photo: Christopher Keating.

The students facilitating Monday’s dialogue are taking philosophy or Three Democracies at Harwood with Kathy Cadwell, and many were a part of a Strategies for Classroom Dialogue class over the summer, also taught by Cadwell.

Monday’s meeting started off in one big group, where everyone heard Phillips speak about his background and explain the layout of the evening. Participants then split into smaller groups where they were led in discussion by two student facilitators.

Groups spent about 40 minutes talking about the roles of freedom and security in a democracy and how to find a balance between them. People brought up the freedoms of speech, press and religion; they spoke about the right to bear arms and how that right can be balanced with the securities that protect people from gun violence.

Groups raised the issue of security cameras and their presence in seemingly private areas. Participants questioned whether the amount of freedom someone has determines their privilege of security.

Once the discussion time had ended, everyone gathered again in the center of the library to share the conclusions of their small groups. As the microphone was passed around the room, it became obvious that no group had come up with an answer to the question. Rather, many new questions had arisen from the one originally posed.

Do freedom and security go hand in hand? Can people have too much freedom? What is the difference between freedom of something and freedom from something? Where is the line between an issue that can be solved by the people and one that needs to be solved by the government?

By the end of the night, many left the library continuing the discussion with friends, apparently leaving with more questions in mind than when they arrived.

“These dialogues open new portals of discovery and curiosity; they do not lead to solutions. As philosophers, it is not only our right to inquire, but it is our responsibility,” Phillips said.

Phillips was 10 years old when his paternal grandmother, a native of Greece, began to instill Greek values of fulfillment and compassion in him, which soon became key aspects of his philosophical endeavors.

Meraki, a Greek term meaning to live fully in soul, heart and passion, and Arete, the concept of living a life of empathy and excellence, were major components of Phillips’ life growing up.

“It’s not enough to be all that you can be,” he explained. “You should feel a sense of duty to others, where you actively strive to help them be all they can be as well.” 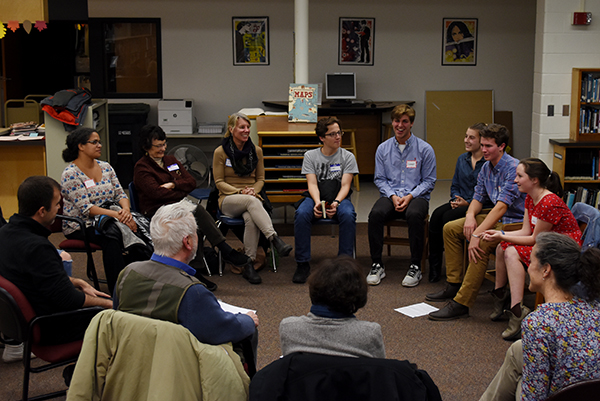 Harwood students and community members partake in a Socratic dialogue on Monday, November 13. Joining the group for this event on privacy and security in America, was Christopher Phillips, founder of the Socrates Cafe. Photo: Christopher Keating.

These principles inspired Phillips to create Socrates Cafe discussion groups, cemented in the Socratic method of “cooperative debates” where people could gather to openly explore philosophical questions. The first group was started in 1996 in Montclair, New Jersey, when Phillips was 37 years old.

The impeachment of President Clinton was unfolding and people were polarized in their points of view. Phillips realized that people needed a space where their opinions could be heard and public dialogues encouraged open and mutually respectful conversation.

“People were upset. They needed a place for exploration and inquiry, not disagreement and debate,” he said. His Socrates Cafes provided just that, quickly spreading around the country and soon throughout the world.

His enthusiasm for inquiry became something he wanted to share with youth, and so Socratic discussion groups gradually spread to schools and classrooms. This setting provided a space in which students were more inclined to participate and eventually were able to organize and facilitate the dialogues themselves.