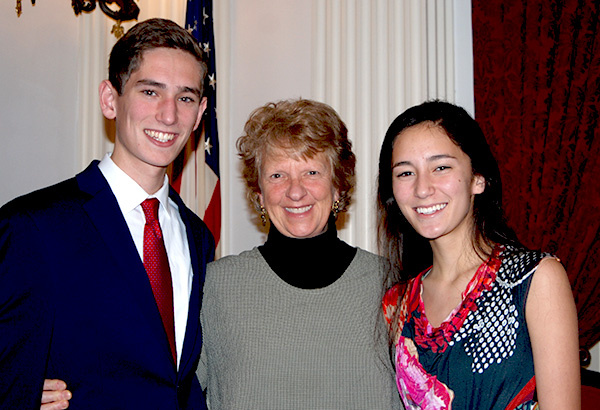 Harwood Union High School was proud to have Kaia Cormier and Walker Caffry Randall representing the Harwood Class of 2018 as two of the 25 Vermont students recognized among Vermont’s 2018 Presidential Scholar nominees. Nominees were honored by the Vermont Department of Education at a ceremony at the Vermont State House on January 8. Governor Phil Scott and Deputy Secretary of Education Heather Bouchey were the guest speakers.

Sally McCarthy, director of school counseling at Harwood Union, said, “It was a pleasure for us to nominate them both. They were both deserving of this honor because in addition to their outstanding scholarship and leadership both Kaia and Walker really shine in service to our school and our community.”

Both students are members of the National Honor Society and are among the strongest academically in the Class of 2018. Both have been involved with Socrates Cafes and the initiative to bring Socratic dialogue into all aspects of teaching at Harwood. As part of that initiative, Cormier has traveled widely to present to school leaders and educators at conferences such as the New England Secondary School Consortium. Caffry Randall is in his third year of service as a member of the Mad River Valley Ambulance Service, where he fits in numerous hours a week of going on emergency calls and continued training on top of his busy school schedule.

Both students are also Harwood athletes. Cormier is a soccer standout and Caffry Randall recently completed his fourth season on the cross-country team, serving as a co-captain this year and is in his second season as co-captain of the Harwood Nordic team. Caffry Randall is the co-president of Student Government. Cormier is co-president of the Sustainability Club. Both are clubs where student voice is upheld and often has an effect on school policy. The Peace Alliance, the Senior Class Council, Interact, and She’s The First are among the other clubs that the students belong to.