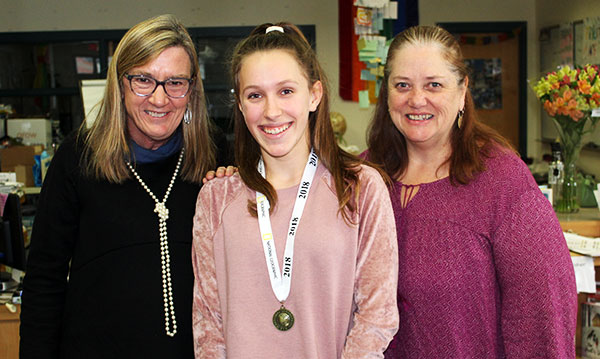 Crossett Brook Middle School eighth-grader Tatiana Heintz from Waterbury Center and Kayla Darrow, a fifth-grader at Fayston Elementary School, have been notified by the National Geography Society that that they are semifinalists eligible to compete in the 2018 Vermont National Geographic State Bee to be held at Castleton University on April 6.

Darrow earned the right to represent Fayston in the semifinals by answering these questions:

The Seikan [SAY-kahn] Tunnel connects the island of Hokkaido [ho-KAI-doh] with what other Japanese island?

Amelia Earhart went missing in 1937 while attempting to fly around the world with her navigator, Fred Noonan. National Geographic is sponsoring an expedition to search for the crash site at Nikumaroro [NEE-kuh-mah-ROH-roh] Island. Nikumaroro Island is a part of Kiribati [KEE-ree-bahs], located in what ocean?