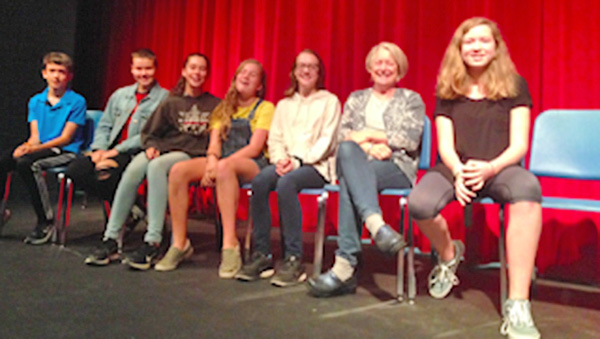 On Friday, September 28, HUMS held its annual team qualifier for the HUMS spelling bee team. Members will compete in the regional spelling competition sponsored by the Vermont Principal’s Association.  Veteran spelling coach and community volunteer Judi Gross, was the guest pronouncer for the bee and is looking forward to another season. Friday’s competitors won their qualifying spelling bees, competing during ELO times under direction of their language arts teachers.  Finalists competed for the three open seats on the regional spelling team. Coach Gross and her new team of spellers are optimistic -- setting their sights on the state championship title.

The 2018 HUMS spelling team include returning team members Beckett Kahn, Ciera Fiaschetti and Anna Sanborn and will be joined by the new team members Lindsey Bigelow, Kate Cox  and Francesca Galati.  The team will meet with Gross for regular practices through the month of October and will compete in the VPA Regional Spelling Competition on Saturday, October 27, or November 3 (TBD). If they take the regionals, they will head to the state competition held at St. Michael’s College on November 17.