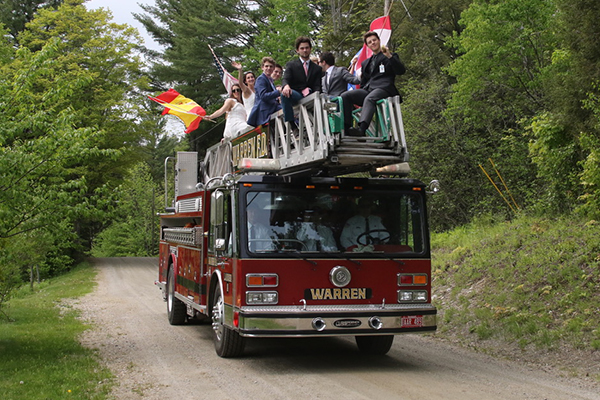 Last week, Green Mountain Valley School wrapped up another successful school year with final exams, prom, an all-school dinner, and lacrosse playoff games for both the girls’ and boys’ teams. The week culminated with the commencement ceremony for the Class of 2019 on Saturday, June 1.

In keeping with GMVS tradition, the graduation ceremony focused on the graduates, each of whom shared heartfelt thoughts and memories about their time at GMVS. The graduates’ short speeches offered inspiring, touching and emotional tributes to their teachers, coaches, fellow classmates and families.

The graduation ceremony also featured the awarding of the Governor Phil Hoff Vermont Honor Scholarship and the recognition of the school’s valedictorian. The Phil Hoff Vermont Honor Scholarship is awarded annually and goes to a Vermont resident who has participated in community service as well as other extracurricular activities and has demonstrated outstanding academic achievement. This year, the award went to Ava Pavlik of East Burke, VT, who will be continuing her education at Plymouth State in their honors program. For the first time in the history of GMVS, the school recognized two valedictorians for the highest GPA in the graduating class. Both Ariana Turner of Andover, MA, who will be attending Brown University, and Sophie Rosen of Warren, who will continue on to Swarthmore College, earned the school’s highest academic honors and graduated with the exact same GPA.

The 20 seniors were ushered in atop the Warren Fire Department’s ladder truck. Most of the graduates will be continuing on to various colleges and universities throughout the United States, Canada, Spain and Scotland. A handful will remain at GMVS to participate in postgraduate studies and continue to pursue their ski racing goals.