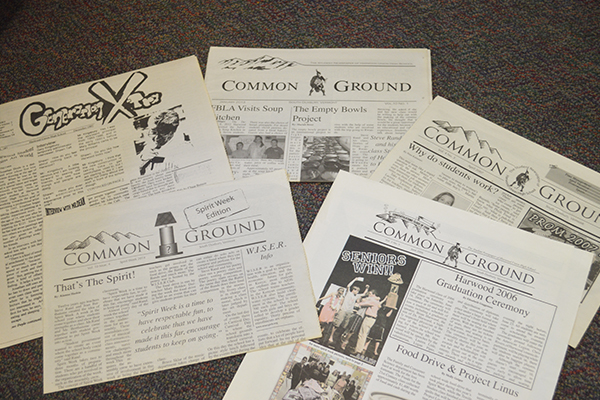 Chris Whalen, an English teacher at Harwood Union High School, is restarting the school newspaper – in a different way.

Whalen, who had originally started the school newspaper in the 1990s, has seen the newspaper trends ranging from paper to new age media. The newspaper’s new focus will be online distribution but still centered on school news and student interest.

The opportunity to participate in the school paper, known as The Common Ground, will be offered once again to Harwood students after a brief hiatus due to lack of interest. Whalen used to co-teach the journalism and media course with Sam Krotinger, who is now a part of the school administration. Whalen will be taking on this full-year course by himself and hopes that the program continues to grow.

While the course took a brief hiatus, in recent years students have asked to bring the news source back.

“Rather than printing the paper as we did before, it’s going to be done online. I’m also interested in investigating radio and video,” said Whalen.

Harwood is in the process installing a new green room for student video projects near the library where students can learn about filming, interviewing and possibly news broadcasting in the future.

The students now all have Chromebooks to write their stories compared to the first years of the publication when students worked collectively in a computer lab. The reboot of the journalism course is still being worked out. In the past, students wrote stories but were also taught media and graphics and how to publish and layout their own paper pages.

When asked what content would be published in the paper or online source, Whalen said he would have to discuss it first with his students. “I want to talk with the students about what we want our audience and readership to be. I’m thinking first of all it’s going to be a publication for the school and community, which will be students, faculty, staff, but also apply to community. What kind of stories would interest people in our readership?  Primarily it’s going to revolve around stories that have to do with Harwood, but I want to hear what the kids want to investigate and report,” said Whalen.

Whalen said he always tries to be open minded when it comes to students’ ideas. If they want to write on movies, book reviews, local happenings and community members and more, they can, as long as there’s a good journalistic reason to report and something with value.

Last spring, during the school’s step-up day, Whalen met with some students who will be taking the class. The students seemed excited and enthusiastic about the course, he said. The course will teach students how to write different types of articles, how to interview and how to set up a story.

“I want to make sure the students have a solid grounding in journalism before we get started because it’s very important to me that we take it seriously. In this age where people feel that news is sometimes untrustworthy, I want our publication to be seen as trustworthy,” said Whalen.

The Valley Reporter will work with the journalism course as it progresses and will invite students into the office to show how an issue of the weekly paper is planned, produced and published. The class will also be able to see the different roles one can have in the industry, ranging from writing, graphics, ads and paper setup and publication.