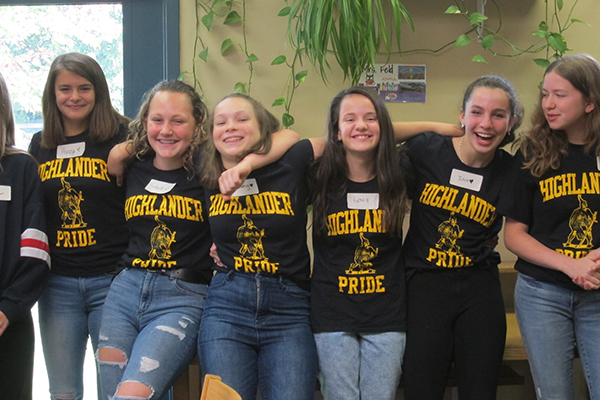 On Thursday, October 3, Crossett Brook Middle School (CBMS) hosted the first annual Vermont Principals’ Association Spelling Competition for grades seven and eight. Harwood has had a grade seven and eight team since the inception of the team competitions in 2005, and has generally moved on to the regional competitions unopposed as the district representative. This year they had a contender for the HUUSD title.

Spelling coaches Jennifer Hill and Jacki McCarty organized the competition, which was hosted by CBMS. Thatcher Brook library media specialist Nancy Daigle was the guest pronouncer for the competition. Kelsey Burnell was the scorekeeper and Laura Wedel, Bernadette Cuttler-Bloom and CBMS Principal Stephanie Hudak were the acting judges, and also provided sentences, word definitions and word origins as needed.

Both teams were evenly matched with spelling talent, and for many rounds the scores were within six points (three words) of each other. The final round proved challenging for all spellers, with words like dodecahedron, bourgeois, and feng shui. The final score was 76-92, with Harwood taking the district title. The HUMS spelling team will move on to represent HUUSD in the VPA Regional Team Spelling Competition on October 26, 2019.