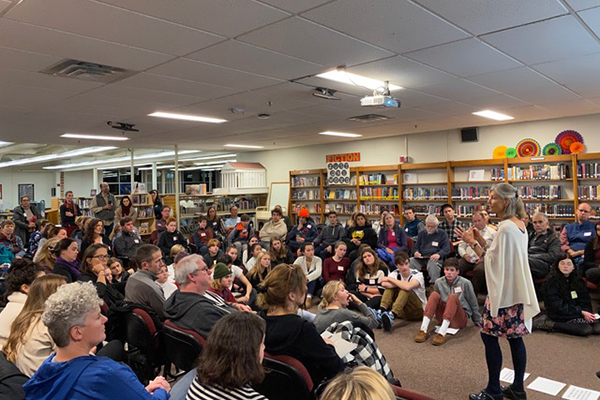 On December 3, Harwood’s Untold Stories class hosted a widely successful community Socrates Cafe. The course, which is co-taught by two seniors and an English teacher, focuses on the history of African American and indigenous people in the country. The students organized and facilitated the discussions themselves, along with the help of Kathy Cadwell’s Strategies for Classroom Dialogue class.

Around 130 community members, teachers, students, parents and Harwood alumni gathered to discuss the question, “How might a lack of diversity in our community impact our perspective about ourselves and others?”

After splitting into seven groups, student facilitators explained the guidelines of the discussion. A Socrates Cafe utilizes the Socratic method in which people participate in an intentional conversation to unpack a philosophical question. Students encouraged their groups to ask questions, listen openly and embrace moments of silence.

As the discussions began, it was clear that there were many interpretations of diversity. Some groups spoke about race, while others brought up sexuality and gender identity, disabilities and socioeconomics.

One group began their dialogue by talking about diversity of native versus nonnative Vermonters. A community member, who shared that he was adopted by native Vermonters, explained that there was sometimes an attitude toward tourists or new residents.

“You can always honor your roots and how you were raised, but you can still grow to see others through a more open lens,” he said.

In another group, an adult asked a student how kids in Vermont get an understanding of the realities of other races, and an Untold Stories student jumped in to reply.

“I think a lot of what we learn is from textbooks, and that’s really unfortunate,” he shared.

Another group focused on race, discussing how a lack of diversity can become normalized over time.

“It’s things we don’t even notice. I have the privilege of going into our local store and finding what I need to wash my hair,” one woman said.

After the conversations wrapped up, people were able to come together and share with the whole group.

The students that led the discussions were all impressed by the interest shown by their community and enjoyed hearing the different perspectives among group members.

“The great thing about facilitating is that you’re not really contributing to the conversation, but you get to listen and learn from people who really care about the topic,” said a sophomore facilitator.

At the end of the evening, many attendees walked out of the library continuing the conversation with their neighbors. One student said she was glad that people seemed to leave with more questions than answers, a clear sign that they had been deeply engaged in their discussions. According to one veteran senior facilitator, that is the goal of these dialogues.