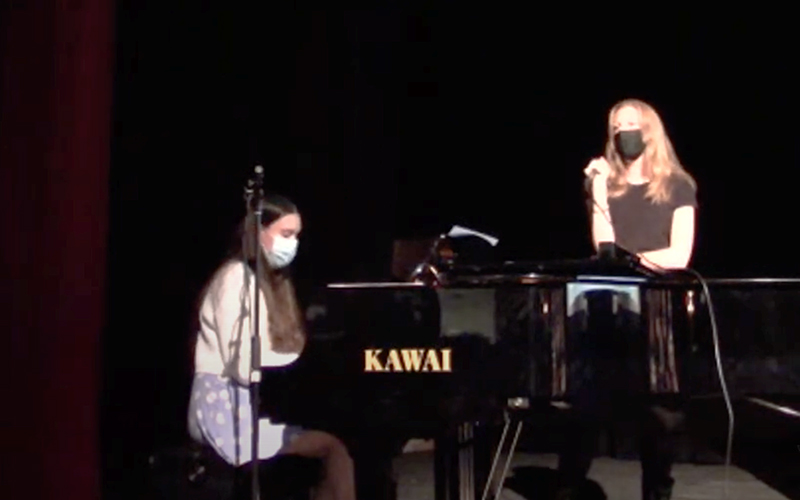 On Sunday, November 21, current Harwood National Honor Society (NHS) members, inductees and community members gathered with around 100 people in attendance, as well as 38 people on a livestream, to celebrate each of the inductees through a socially-distanced (but in-person) event.

The ceremony began with Kathryn Youngdahl-Stauss, the Harwood chapter advisor, giving welcoming remarks about the importance of NHS in the community. Co-presidents Tatiana Heintz and Jaye Fuller introduced the celebration, followed by co-principal Laurie Greenberg who shared a poem by Margaret Wheatley. The candle ceremony, which included speeches on the four pillars of NHS: scholarship, service, leadership and character followed. Rachel Goodwin spoke on scholarship, Rubi Murphy on service, Anna Alberghini on leadership and Hana Behn on character.

Claudia Derryberry sang “Sunday Morning” by Maroon 5 with Allie Brooks accompanying on piano and vocal harmonies to celebrate the incoming members. After that, current members gave speeches recognizing the inductees one by one on their qualities and achievements while a slide show designed by Hana Behn played in the background. Finally, McDonough closed the ceremony by quoting Dr. Martin Luther King Jr.: “Make a career of humanity. Commit yourself to the noble struggle for equal rights. You will make a better person of yourself, a greater nation of your country and a finer world to live in."

Krotinger is the secretary of the Harwood Union National Honor Society chapter.