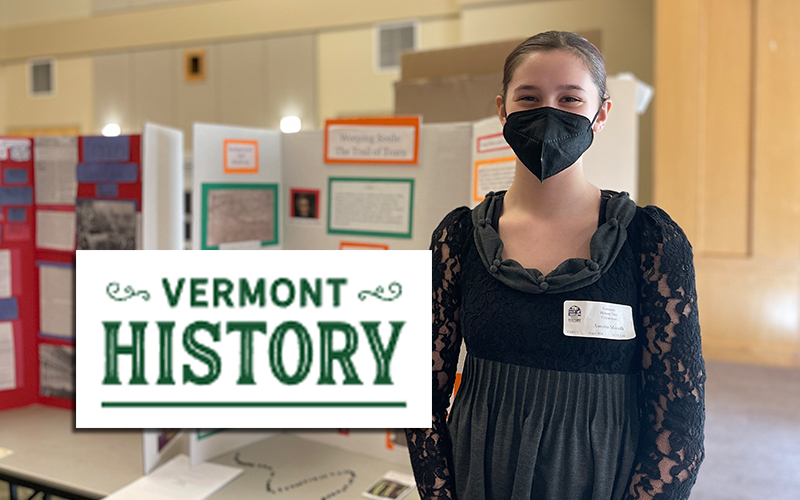 Thirteen Harwood Union Middle School students participated in the Vermont Historical Society’s 39th annual Vermont History Day (VHD) earlier this month. During the April 2 event, Vermont students competed with displays, websites, talks, performances and presentations related to history. Approximately 170 Vermont students in grades four through 12 from 17 schools and districts participated in this year’s competition, which was themed “Debate and Diplomacy in History.” Students’ projects were reviewed by teams of volunteer judges composed of local historians, educators and other professionals from the community. This year’s competition was held both virtually and in-person at the Davis Center at the University of Vermont in Burlington.

“HUMS students have been participating in NHD for the past six years through social studies class and this year in combination with English class,” Harwood teacher Sarah Ibson said. “NHD teaches the skills of how to be a historian -- asking questions, researching and writing, and proving a thesis statement. As a part of the research process, students are encouraged to use primary sources and focus on multiple perspectives in learning about their topic. This year's theme is Debate and Diplomacy in History so students could pick any topic as long as it fits within that theme. The topics that students choose are not ones that are necessarily taught about as a part of our curriculum, but ones that students have an interest in or after doing some research find a strong connection to the theme.”

“Nicky chose the Cuban Missile Crisis and although he has built websites before he had to learn how to use the NHD website builder,” Ibson said. “Eliza and Haley created a well-designed website with detailed research about the Seneca Falls Convention. Because NHD is a contest at the state and national levels there are strict parameters that students have to follow in creating their projects. Students can create a website, documentary or exhibit, do a performance, or write a paper. Milo and Leo chose a topic for which they were passionate and they won the military history prize for their exhibit on the Manhattan Project.”