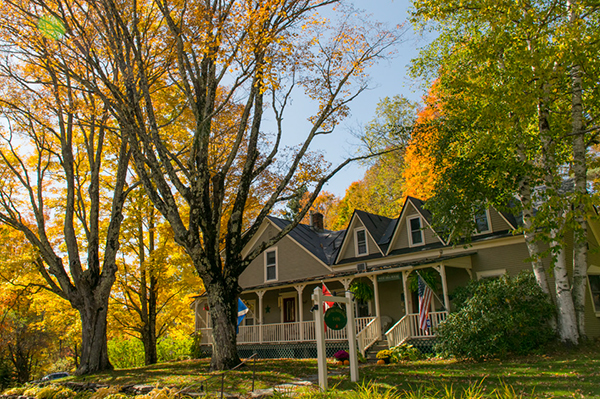 “I think in curved lines; he thinks in straight lines,” said Susan MacLaren who, with her husband Peter, owns and runs the West Hill House B&B in Warren. She’s an educator by profession and he’s an engineer. They spent the first half of their marriage living partially apart as Peter was traveling a lot for work.

In 2005 they came to a transition point in their lives when Peter “retired” from 35 years in the telecoms business.

“We realized that for the first time we could live anywhere in the world,” Susan MacLaren said. “We’ve always liked looking after people,” Susan continued, and they began their search for the right bed and breakfast.

They selected the Northeast because of the seasons and ease of getting here. They wanted a place where there was plenty to do year-round. It took them 15 months of looking at inns before they came across the West Hill House B&B, which has the character of an 1850s property but with updated rooms and bathrooms, plus lots of common space and gardens. It is also right beside Sugarbush and adjacent to both the Long Trail and Catamount Trail.

The inn, located on a side road off a tree-lined side road, felt like home to them from the start.

“Peter and I collectively have moved so many times. This felt like home,” said Susan.

Now, as they live and work together, rather than Peter going out into the world for work, the world comes to them, where their alchemy creates a homelike setting with adequate privacy, comfort and as much interaction as guests want.

Susan puts her hospitality and cooking skills to good use in addition to “educating” Peter on housekeeping, while Peter is the engineer for the entire physical plant and looks after most of the internet-based marketing.

What they most enjoy is interacting with guests and living in the Mad River Valley as well as anticipating and addressing the evolving needs of guests. As an example, they noticed over the years that people increasingly travel with more and more devices to be charged in their rooms so they outfitted their rooms with multi-charger outlets.

They have embraced the environmental activism of Vermont and even proselytize to their guests. Their inn is 100% solar powered since 2015 and they drive an electric car and provide electric car chargers. Their hot water is solar powered, they compost their food waste, and they recycle everything possible.

“It’s always interesting for us to talk about this aspect of Vermont. People don’t have that awareness in many places,” Peter said.

With foliage season behind them, they’re gearing up for ski season and Veterans Day next week, when they’ll again be participating in the B&Bs for Vets program during which innkeepers make free rooms available for vets and active service members for one night and offer 50% off a second night.

They don’t raise the topic of people’s service, but they do decorate the table with poppies and Susan reads “In Flanders Fields.”

“One year, we had three pilots with us: one from WWII, one from the Korean War and one from Vietnam. They spent most of their meal talking about the specifics of their aircraft,” Susan said.

Both offered their gratitude to their landscaper, Paté Weston, and her crew; their grounds manager, Doug Ricketts, and his team; as well as their housekeeper for the last six and a half years, Jessica DeLisle.

“We couldn’t have done it without them,” the innkeepers added.

In addition to innkeeping, Peter has been very engaged in the community and has been a strong supporter of the Mad River Valley Chamber of Commerce since he and Susan first arrived. Peter is currently chair of the chamber board and also serves on other community committees.

Guests often ask Susan and Peter how long they will continue as innkeepers. Their answer: They can’t currently imagine anything else that they’d rather do, so until that changes, they plan to continue offering great hospitality to guests at West Hill House B&B!