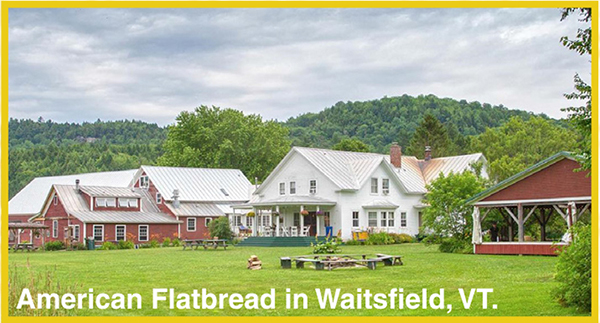 While many in The Valley and Vermont bemoan the outmigration of young, local folks, there’s one Waitsfield business where four young people who attended school together now toil together.

The kids, Willis Schenk, Justin Ricketts, Sarah Auger and Sam Siegel, have more than their shared upbringing in The Valley in common. They work in various management and middle management positions at American Flatbread in Waitsfield. Additionally, they all left The Valley for various points north, south, east and west.

What brought them back? And how did they tackle the issues that make Vermont so difficult for young people?

American Flatbread, founded in 1985 in a hand-built stone oven at the former Tucker Hill Lodge on Route 17 by George Schenk and his wife Mary (Girl George) Schenk, has been community focused since its inception. The company expanded, landing at Lareau Farm in 1991.

“It’s hard to move away from the place you grew up,” he said, noting that Vermont’s environmental policies and politics were definitely “part of the way I grew up.”

He plans to stick around – and not long ago bought a house on Lincoln Gap.

“There’s nowhere else calling my name. Vermont and The Valley are great,” he said, laughing when asked if there are things for young people to do here. “If you know how to make your own fun, there are things to do,” he said.

Justin Ricketts, 28, was the first employee of The Butchery in 2012 which led him to a culinary career in Oakland, CA, where he and his partner moved in 2013, working first in the restaurant scene and later at a local butcher shop in Berkeley working with local farmers and whole animals, which he really enjoyed.

“It was the whole animal experience,” he said, explaining that at Flatbread they do make house-cured salami in the smokehouse. In Berkeley, his work involved using animal parts that can’t be used at Flatbread and the Lareau Inn, but he does work to pair with the inn when butchering farm animals.

Family is another reason that brought him back.

“I wanted to be close to my family and keep an eye on my parents. I’m living in a multigenerational house with my family in East Warren,” he said.

Sarah Auger, 30, was raised in Moretown. At Flatbread she creates the pastries and works front and back of the house. She’s a graduate of the Culinary Institute of America. She moved to California after working as the pastry chef at Shelburne Farm.

“I didn’t really like California. I missed Vermont and my family and I missed how green and lush Vermont is,” she said.

She came back about four years ago after a stint in NYC. Housing was a problem in California and NYC. Locally, she’s solved the housing problem by living multigenerationally on South Hill in Moretown. She’s planning to start her own wedding cake business.

“It’s nice here, lots of good people. Relaxing. The thing about skiing out West is that people are very competitive about skiing – getting to certain trails first – and work. It’s very different from here,” he said.

“Here, people’s priorities are different. People care about the water and you can swim in the rivers,” he said.

“What it means for us is that it has infused the business with the next generation’s energy and enthusiasm. That is absolutely essential for the business to imagine it going forward,” George Schenk said.

Both Schenks said they were happy to have younger people around for their son and others to socialize with but also said that their ability to create their own fun outside reflects the way they were raised and the rich recreational opportunities that The Valley offers.

“As they went to other places, they saw that just because it was remote or exotic doesn’t make it better,” George Schenk said.