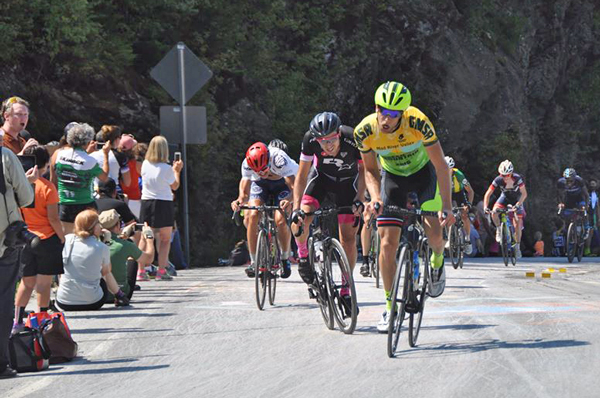 Some things in this great big world are perfect, some things almost perfect and some things just downright crazy.

So it was this past weekend in the Green Mountain Stage Race with more than 700 cyclists – an almost 30 percent increase from last year – in 11 race categories expending millions of watts worth of human power in four days of racing that covered (depending on the field) as many as 216 miles. The weather was perfect, the racing, with perhaps the fewest serious crashes in the 16-year history of the event, was almost perfect and the crazy part – well, more on that later.

Although it was just a little bit crazy that the mother of four small children (or was it five? Too many to count ...) could pry herself away from the duties of toddler management long enough to absolutely crush the competition in the women’s elite race.

Amy Bevilacqua, from Southbury, Connecticut, had done this before. She was the overall winner of the 2013 GMSR, before taking time off to give birth to her fourth child (or was it her fifth?). She returned this year to put an immediate claim of ownership on the 2016 overall title by knifing through a stiff headwind and zooming to a win in the opening 5.4-mile time trial along Brook and East Warren Roads.

The margin of victory over Stephanie Sydlik of the Amy D. Foundation and former national team member Lauren Hall was a comfortable 29 and 34 seconds, respectively. Hall, who took home the green jersey awarded to the best sprinter, then sped away with the win on Saturday’s Stage 2 circuit race on a new course in Addison County. But Hall (and everyone else) was ridiculously outmatched by Bevilacqua on hilly Stage 3. The mother of many charged up the final climb on the west side of the App Gap in such a rapid solo breakaway that finish-line officials almost had time for a lunch break while waiting for other riders to show up. The winning margin over second-place Sydlik was an extraordinary 2 minutes, 46 seconds.

Little did it matter that the high-speed, final-day criterium in Burlington would be the sort of racing that made Bevilacqua look despondent when called to the start. “Not my thing,” she said, grimacing, of criterium racing. But she hung with the pack all the way to the finish, easily securing the yellow jersey that goes to the overall champion.

Canadian James Piccoli’s win in the men’s elite race probably deserves an almost-perfect assessment. This was Piccoli’s fourth GMSR (or was it fifth? Almost as hard to count as Bevilacqua children) and he had been close before, finishing fourth overall in 2013. With strong performances in the first and third stages and at an average speed exceeding 26 mph, Piccoli took the yellow jersey that narrowly escaped him three years ago. The only slight imperfection: In his years of GMSR racing, he has still not enjoyed the distinct honor of standing atop the podium as an individual stage winner.

But that leads to a storyline that was, in a way, a form of perfection. The podium love this year was spread far and wide; 34 riders in the 10 stage-race categories were winners, with a total of 40 stage victories up for grabs in four days of racing. In other words, an unusually high number of riders reached the podium’s top step and if a winner is perfection personified, then there was perfection aplenty to be shared at this year’s GMSR.

There were also dollars aplenty flowing through the local economy. Almost every one of the 700 visiting riders brought along at least one friend or family member or spouse – or a half dozen or more, if you happen to be Amy Bevilacqua. Most came for four days and nights – some for fewer, many for more – sleeping, eating, drinking, gassing up, buying souvenirs and crafts, and otherwise juicing up local businesses.

A few local folks might have grumbled as the wait for a table at many a local restaurant often stretched late into the evening. But to the good: Business was booming. The report from The Warren Store during Friday’s time trial was that business was “phenomenal,” and the line at The Mad Taco on Sunday after the racing was done stretched well out the door, heavily populated by skinny guys with shaved legs. Fact is, cyclists burn copious calories and they eat a lot. All told, using a per-person, per-diem calculation of tourist expenditures from the University of Vermont, the visiting cyclists and friends contributed something like $2.5 million to the local economy.

Finally, to the matter of craziness: Riders in this year’s GMSR came from all reaches of the continent and the world, representing 36 U.S. states and Canadian provinces and several more far-flung countries, including, of all places, Eritrea. Yohana Dewit, a 24-year-old Eritrean member of the Amy D. Foundation team, came to the GMSR via Africa Rising, a program to aid in the development of young cyclists. She rode admirably, with top-10 finishes in the first and third stages.

And then she disappeared.

On Sunday afternoon at the criterium in Burlington, the Amy D. Foundation team managers were frantic. Dewit should have been on a stationary trainer, preparing for her start. Instead, she was gone, vanished in the streets of Burlington in a move that the team managers suspected might have been an effort to seek refugee status or political asylum. But who could tell? Dewit spoke not a word of English, not even a simple hello. So her motive was unclear. And there was also the possibility that she might have been abducted.

A day later, she was located, having joined a cousin somewhere in the general Burlington metropolitan area. At press time, the details remained murky – why she did it, what her next steps might be and what immigration authorities might have to say and do about the matter. Regardless, it was certainly a GMSR first. There have been many breakaways over the years, but never before anything so crazy as an outright getaway.

In the final race of the weekend, the men’s elite criterium, Canadian Pier-Andre Cote won the 31-mile race with an average speed of 29 mph. If riders in the peloton had been in motorized vehicles, speeding tickets would have been issued. As it was, the Burlington police were among the spectators cheering riders on as they blazed to glory. It was indeed a glorious, often perfect and sometimes crazy four days of racing.