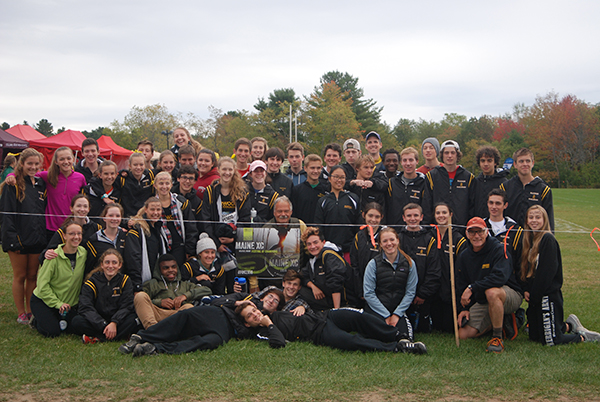 The Harwood cross-country team was in Belfast, Maine, on Saturday, October 1. The Maine XC Festival of Champions was the biggest meet of the year for the Highlanders with over 1,600 athletes representing 78 teams from New England and the Canadian Maritimes. The weather was cool, the ground was dry and the 5K (3.1-mile) course has few hills. “I think we can expect some fast times today,” said head coach John Kerrigan before the races began. “This is always the most exciting meet of the year for our team and with these conditions we should see some PRs (personal records) today. The kids are really amped up for their races. I told them before they got off the bus this morning, ‘Put the Vermonters ahead and keep the column close. Start fast and stay fast.’”

“I was just trying to stay with them as long as I could. I’ve never been in such a big pack going so fast before,” Magill said after the race. “That was crazy fast!”

Assistant coach Tom Strasser added, “Erin ran a spectacular race. With just a little more endurance, she’ll be able to keep up with those girls. I think she learned a lot today.”

Earlier in the day, Walker Caffry-Randall had the first PR of the day in the first race, the unseeded boys’. Caffry-Randall started in the middle of the pack of 352 boys and gradually worked his way up through the race to finish 12th with a time of 19:16.61. Also under 20 minutes were Thomas Reiskin (42nd, 19:48) and Riley Hebert (45th, 19:50.21), both personal records.

All told, 45 of 47 runners had their best times of the season and 35 of those were personal records. Those great times were reflected in the overall team competition, where the Highlander boys finished sixth out of 61 teams, just missing the top five by one point. The girls finished fifth out of 58 teams. “Only one other school (Greeley, Maine) had two teams in the top 10,” coach Kerrigan said. “Our combined team is one of the best. This sets us up well for the Harwood Invitational (coming up on October 15), which is the only invitational that combines the boys’ and girls’ scores.”