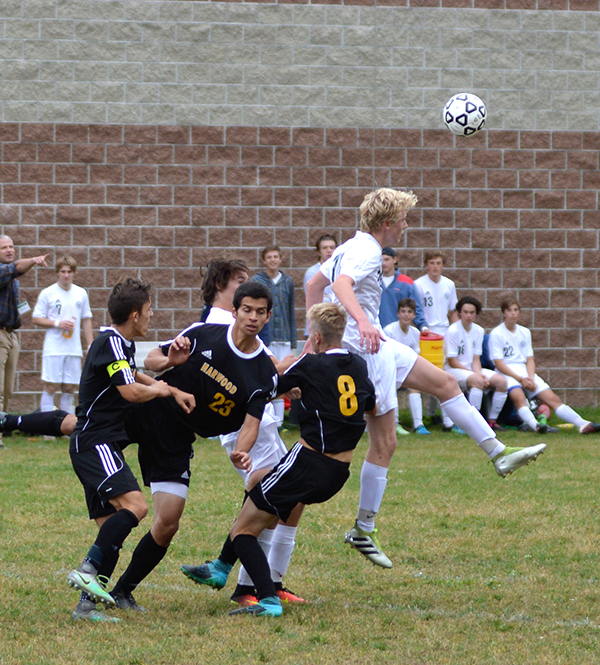 Both of Harwood’s varsity soccer teams did not have to travel far for last Saturday’s, October 1, matchup against Green Mountain Valley School (GMVS). In what was probably the most attended game of the season thus far, members of both teams were able to play against some familiar faces.

Harwood’s girls’ team picked up their second win of the season moving to 2-4-1 on the season, while GMVS will now be 1-2-0.

Brynne Quirion’s goal was the deciding factor for Harwood in Saturday’s hard-fought battle among friends.

The most promising opportunity to score in the first half came to Harwood’s Camille King when she was given a penalty. King lined up with the rest of the players behind her ready to rush for the rebound, but when the time came, King missed the shot to the left of the net. 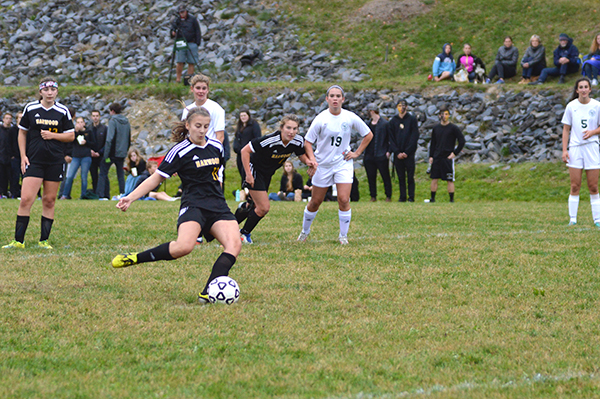 GMVS could not seem to get their offense moving throughout the game. Harwood’s goalie, Eve Golden, was only forced to make four saves on the day. GMVS’s Lindsey Crowell was given a direct free kick just outside the penalty area during the first half, but the ball sailed over the cross bar.

Harwood had to pick up their intensity throughout the game “because GMVS is always so fit and they’re such great athletes that you have to bring the level of intensity just to play at their level,” Harwood coach Mike Vasseur said.

“We were just able to thread the ball through and then run on and get some opportunities and that’s what Brynne did and she netted it and that’s been our biggest challenge this year, getting the ball in the back of the net,” Vasseur said.

These two teams will meet again on October 10.

The GMVS boys showed their athleticism by overcoming Harwood late in the game to take the win against the previously undefeated Highlanders.

GMVS came into Saturday’s game following their first loss to a Division 3 opponent, Enosburg Falls, in which they were blanked 3-0. GMVS coach Jerry Brophy said it was good to rebound with a win against Harwood.

Luke Midock scored in the end of the second half to propel the team to 3-1-0 on the season.

Both teams scored in the first half. Mason Kasper deflected a ball into the net and Harwood scored on a penalty.

The level of intensity was very high on both sides of the field and Harwood coach Don Haddox noted how strong GMVS’s players were.

“It’s pretty rare that I am going to prepare differently for any team that we play, including GMVS. We certainly talk about them being very athletic, about them being physically strong and wanting the game really badly, and I think that’s exactly what you saw,” Haddox said.

Haddox lamented his team’s poor passing during the game and said that his team is built on being able to move the ball well. He also said that this game would give his team clear guidance moving forward into the rest of the season.

“I think there is more excitement mainly because many of our guys either grew up playing with most of the guys on the Harwood team,” Brophy said.

“It’s really a nice relationship and I think the guys really enjoy the game because they’re playing against guys they know. ... I don’t like calling it a rivalry because I don’t consider us rivals. I respect Don Haddox more than any coach in the state,” Brophy said.

Although these teams will not see each other again during the regular season, there is a chance that they will be paired up in the playoffs if both sides continue their success.