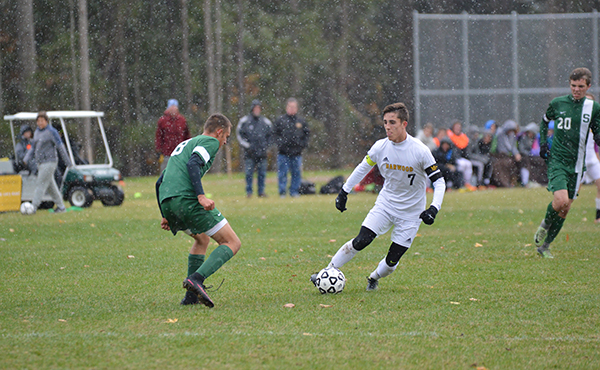 Harwood boys’ soccer cruised past Springfield with a decisive 10-0 win to advance to the quarterfinals.

The Highlanders made sure their presence was felt early on, scoring five times in the first 10 minutes, putting Springfield far back on their heels. Connor Woolley scored in both the first and second minute followed by Austin Taylor and Jake O’Brien in the fourth and sixth minute. Woolley completed his hat trick in the seventh minute.

Jake O’Brien added two more goals in the 35th and 39th minute, getting three goals of his own just before the first half ended. Ethan Riddell added two more scores and Theron Williams added one more to make it into double digits.

Harwood coach Don Haddox could be heard from the sideline telling his team to keep their concentration. Even though they scored 10 goals, Haddox noted that the Highlanders only capitalized on half of their scoring opportunities.

Harwood will face a tougher opponent on Friday, when Green Mountain Valley School travels to Harwood. GMVS handed the Highlanders their only loss of the season on October 1.

Although they lost their last matchup against the crosstown opponent, they have since regained a crucial member to the Highlander side. Captain Jonathan Zacharias was not with them on October 1 and having him in the lineup on Friday will make a big difference, said Haddox.

Haddox said that since that loss the team has been waiting for their chance to redeem themselves. They will get their chance in what is expected to be a rainy game at 3 p.m. this Friday, October 28.