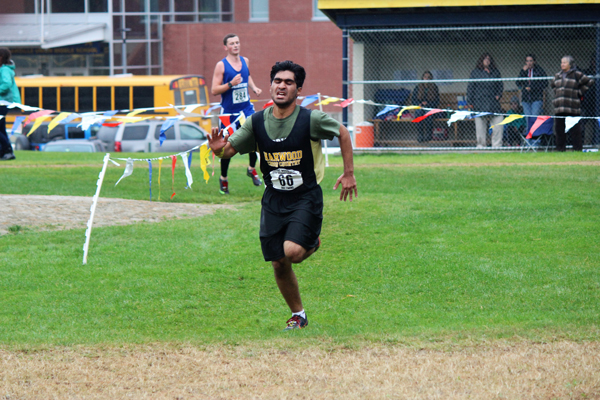 Harwood cross-country completed a clean sweep at the NVAC Mountain Division Championships at Lamoille Union High School on Saturday, October 22. The high school runners took to the course after the middle-schoolers had already won both the girls’ and boys’ races.

Junior varsity girls scored 21 points to easily beat out second-place North Country with their score of 51. The Highlanders were led by sophomore Hannah Clark, who finished second with a time of 24:40. She was closely followed by freshmen Alex Pendo (third, 24:41) and Sydney Kulis (fourth, 24:48). Also scoring points and finishing in the top 10 were sophomore Anna Schmeltzer (fifth, 25:06) and freshman Sarah Kate Smith (seventh, 25:29).

"To have our underclassmen perform so well at the JV level today bodes well for the future of our program," said head coach John Kerrigan. “All those girls had one of the best races they've run. Sarah Kate even had a PR (personal record) today."

In the JV boys' race, the Highlanders placed seven runners in the top 10 and received another score of 21, beating rival U-32 by 31 points.

"The JV boys basically threw a blanket of black and gold across the finish line today," Kerrigan said. "Riley Powell made it look easy with his 20-second margin of victory and Acme ran his best time all season to solidify the win for Harwood."

"Erin has been strong all season, while Lily and Katie have been consistent," Kerrigan said after the race, "Julianne and Willa have been showing the steady improvement you hope for from freshmen. Anneka and Isabel both started the season strong but have been dealing with lingering issues from past injuries. Today they both ran great races and showed that they are ready and anxious to run at states in a couple weeks."

The pressure was on for the boys' varsity race. The sweep was at hand, yet their task was perhaps the hardest of the day. Two boxes down from them at the starting line was the vaunted U-32 team, the favorite to win.

"No NVAC team had ever swept all six races," Kerrigan explained later. "U-32 has had a couple injuries, but we were without team captain Colin Fennelly, who was taking the ACT test today."

The race started fast and Harwood team leader Noah Eckstein soon had to drop behind the lead pack that included U-32 standout Stephen Looke and Montpelier's Matt Hynes. As the racers went off into the woods and out of sight just after 1 kilometer, Eckstein was in fifth and Harwood's Daniel Bevacqui was 10 seconds behind him. It was impossible to tell the positions of the teams as the rest of the pack sailed into the forest. While the spectators were just standing and waiting for the runners as they sped through the next 3 kilometers of the race, those runners were jostling for position.

The first runner out of the woods, with 1 kilometer to go, was U-32's Stephen Looke. Several seconds later the rest of the lead pack came into view. Noah Eckstein appeared nearly a minute behind Looke, but just behind Eckstein was Daniel Bevacqui. The third Highlander to appear was Brendan Magill, who was locked in a duel with another U-32 runner. Then came Anthony Palmerio and Jesse Bisbee for Harwood, neck and neck with two more U-32 runners. It was coming down to the wire.

As they crossed the finish line the black and gold of Harwood and the blue of U-32 were shuffled like a pack of cards. There was no way of telling which team had the lower score. Fans stood and watched as the scores were tabulated. Then it came in: Harwood 46, U-32 51.

Harwood had completed the sweep by a mere five points.

"I've always said that cross-country is like poker," Kerrigan said, "You have to have five good cards. Today our hand was just a bit better than theirs. Daniel ran a great race and really pushed Noah. Brendan had a PR for the third time this season. The state championship in a couple weeks is going to be really interesting."

On the unprecedented sweep, assistant coach Tom Strasser said, "This really shows the strength of the Harwood program from the bottom to the top. It's incredible."

JV runner Acme Wasi summed it all up: "We got six awards for the cross-county NVAC meet; that is going in history."