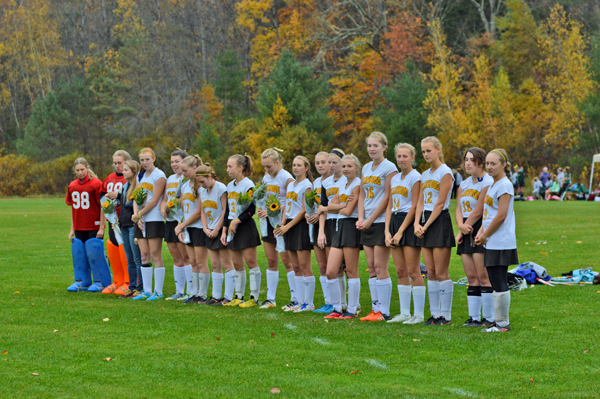 With heart and determination Harwood girls’ field hockey team upset the No. 1 ranked Spaulding, 1-0, in the quarterfinals on Wednesday, October 26.

Celia Lawton saw her chance to take the lead on a free hit early in the game and she took it, putting the ball into the corner of the net.

“She especially being a captain and a senior, in that moment she was so poised,” Harwood coach Heidi Hill said of the goal scorer.

The Highlanders entered the game as clear underdogs, having been ranked eighth for post-season play. Harwood had also played Spaulding twice in the regular season losing both times by a score of 3-0, but this time was different.

Every game is a new game and the post-season is a new season all together, Hill said.

“The whole game was all heart,” Hill said of her team before adding, “They didn’t back down for one minute.”

Goalie Quillyn Peterson thwarted the top team’s efforts on Wednesday with help from her defensive backs.

Harwood field hockey is no stranger to post season success. Since 2010 the Highlanders have won three state titles and have advanced past the first round all but once.

They will hope to continue their season on Monday, October 31, against Springfield. The game will be held at Middlebury on a turf field. Turf makes the game quicker, but the Highlanders have speed, Hill said, and will be ready for it.