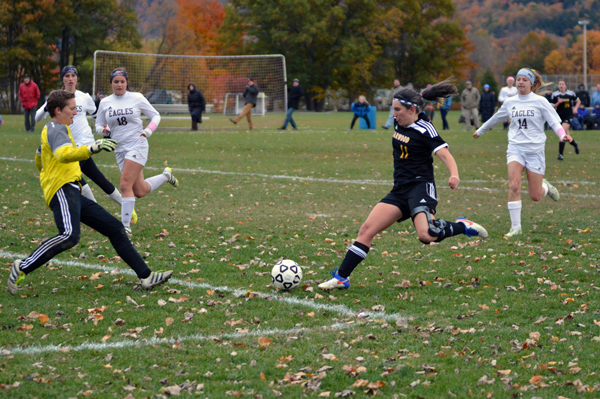 Harwood girls’ soccer defeated Mt. Abraham High School 3-1 on Wednesday, October 26, in the first round of playoffs to advance to the quarterfinals.

Kaia Cormier scored the go-ahead goal in the first period and Kyle Marie Hekeler provided insurance late in the second half to secure the victory.

Hekeler’s goal was able to put Mt. Abe into a hole they couldn’t get out of, “A two-goal gap with 10 minutes left is hard to cover,” Harwood coach Mike Vasseur said.

Cormier’s goal was important because it put the momentum back onto the Highlanders, Vasseur said.

Harwood was ranked No. 10 going into the game, three spots behind No. 7 Mt. Abe, but the regular season may not exemplify what the Highlanders are capable of in the post-season.

“I think playoffs, of course, bring a higher intensity but I think it’s been a progression of every game, I mean we weren’t very good at the beginning of the season, I don’t sugar coat it. I told people we had a long way to come and the kids took that challenge and they’ve just gotten better and better,” Vasseur said.

The Highlanders have certainly come a long way since the start of the season. Harwood dropped their first three games of the season and at the midpoint of their season had only one win.

Since then the Highlanders are 6-1 and have outscored their opponents 24-10. Harwood plays Stratton Mountain School in the quarterfinals on Saturday, October 30.