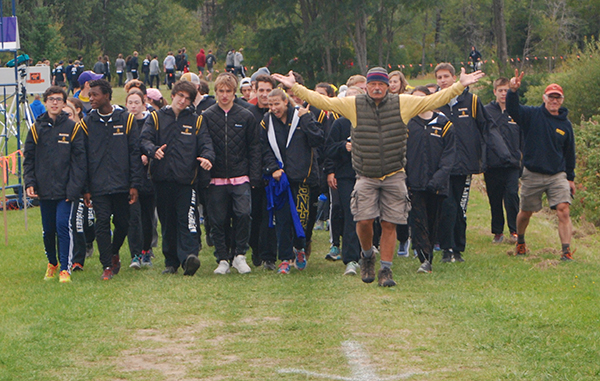 “Put your water bottles in my truck, go run the horseshoe, then meet me up on the track.” Harwood cross-country coach John Kerrigan is preparing his team for the state championships this Saturday, November 5, at Thetford Academy. It’s about 40 degrees and there are patches of snow on the ground from the recent storm. A large group of runners toss their water bottles in the coach’s truck and take off at a trot. Coach Kerrigan stops team co-captain Anneka Williams and talks with her briefly about the upcoming practice, then sends her off with the team.

“Harwood cross-country teams are known throughout the state for their ability to peak at the right time,” Kerrigan said. “This is not luck. It is what we strive for all season. Everything we do is focused on the state championship. By Friday night, the kids should be feeling a little more energetic than usual, a little restless. Like race horses ready to break through the gate at the start of the race.”

Harwood cross-country is the winningest team in Vermont Division II history, with a total of 23 state championships – 13 for the boys and 10 for the girls. The boys have won seven of the last nine championships, while the girls have won an extraordinary seven in a row.

The Highlanders were not always this successful. When Kerrigan took over the reins of the program in 1978, the team was very small and only a few of the runners were girls. That first season the boys finished 11th and the girls finished 16th. “It was clear I had a lot of work to do,” said Kerrigan. “It took about 10 years to develop the culture, the attitude and the numbers.” The numbers have become remarkable in recent years; well over 10 percent of the school now participates in cross-country.

“[Kerrigan] encourages team culture by treating the team as one unit,” Williams explained. “The slowest people run the same intervals as the fastest people. Everyone on the team does everything together. There’s no hierarchy according to speed and I think that’s what makes our team so special. I like running for Kerrigan because he sees your potential. Even if you’re injured or having a bad day, he still believes in you and encourages you to do what’s best for you in the moment.”

“Having respect and confidence from runner to coach is important for the success of a team and I definitely have that for him,” co-captain Colin Fennelly adds. “But respect the other way around is just as important. Kerrigan, more than any coach I've ever had, embodies that. He respects and attempts to understand everyone as an individual. This is how each person on our 70-person team feels like their races and their running success are as important as anyone else’s on the team. This attitude fosters the type of success that Harwood cross-country has. Last week we won all four races, varsity and JV, at NVACs. This is because, in Kerrigan's eyes, the last runner is just as important as the first runner. This pushes the whole entire team to do better and promotes competition within from the top of varsity to the bottom of JV, leading to faster times and winning races. He's also just a personable and funny guy. Everyone on the team connects with him this way, adding to the mutual respect shared between runners and coach.”

Saturday’s meet will be the culmination of all the hard work over the season. The girls are favored to win again, with potentially six runners in the top 10. Erin Magill, Julianne Young and Anneka Williams could well be the first three finishers, and Phoebe Sweet, Lily Clark and Isabel Jamieson will be close behind them with Willa Yonkman rounding out the team. The boys will be in a tight competition with rival U-32. While U-32 is favored, the Highlanders beat them in the NVAC Division Championship last week. Noah Eckstein and Daniel Bevacqui should be in the top 10. Following them will be Brendan Magill, Anthony Palmerio, Jesse Bisbee, Colin Fennelly and Tristian Touchette. They each will have a goal of passing anyone in a bright blue U-32 jersey that happens to be in front of them. If they are going to win, Kerrigan will have to motivate them to be the best they can be.

“[Kerrigan] is a good motivator because he’s tough,” Anneka Williams said. “He definitely pushes the team, holds people accountable for workouts and expects you to be on top of your academics, your sleep habits and your nutrition. His tough love definitely contributes to the team’s success.”

“Kerrigan is a big believer in running from your heart,” Colin Fennelly said. “Training, of course, is extremely important, but when you are out there on the course, Kerrigan strongly believes that the runner who runs the smartest and who puts his guts and his heart into the race will win. He will surely give us a rousing pep talk before our race on Saturday to inspire us to do well. Public speaking is one of his many skills and that is not lost in the huddle before our races. Our school has been through a lot this year and, in addition, for me and for many others, this is our last year to strive for the championship. We will surely be running with our minds but most importantly our hearts on Saturday.”

Kerrigan’s goals are to instill a love of running in all the runners and to encourage them to achieve their highest level of running that they can, while acknowledging that running is just one of their many interests. Most important, he establishes a team bond. About 10 years ago, Kerrigan had to attend a faculty meeting in the school library during practice. He asked the team to go for a run on school property and to run past the library windows so that he would know they were OK. When they didn’t come by, he was worried that something had happened. It turned out that they were in the woods, painting their bodies and faces with mud. When Kerrigan finally found them, they were carrying sticks and singing songs. After expressing his concern, teammate Trey Kiendl said, “Don’t worry coach, we’ve got it under control – we are Kerrigan’s Army!”
Since that time the kids have worn shirts and sweats with the unofficial moniker “Kerrigan’s Army.” The team incorporates it into their prerace cheer: “Who are we? Kerrigan’s Army!” Perhaps it is just a coincidence that the combined teams have won 14 of 18 state championships since the slogan began.

When the runners came back from their workout, they were cold, wet and muddy. But they were chatting, smiling and laughing. They clearly are ready for their big race. Coach Kerrigan had an impish grin: “I worked them hard today. It’s all part of the plan.”