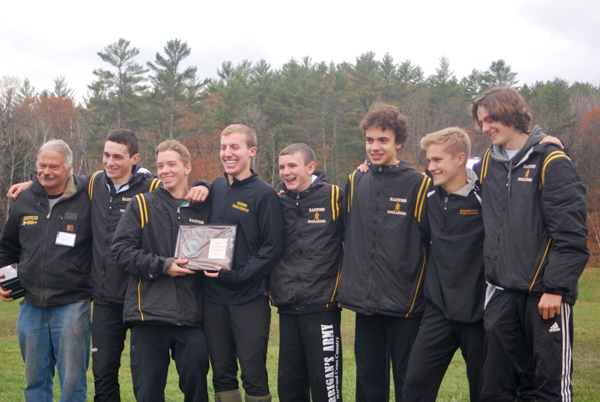 Despite a gallant second half of running on the Thetford hill course, Harwood runners fell just shy of yet another state championship on November 5. In the past decade, Harwood boys have won more state titles than any other Division II school. Harwood boys’ cross-country won state titles eight of the last 11 years.

Harwood placed five boys in the top 15, but it wasn’t enough.

“U-32’s squad had an outstanding day; they ran insanely fast in the first half of the race. Although we gained ground on the back hills it wasn’t enough,” said coach John Kerrigan. The HU boys were led by Noah Eckstein, fifth; Daniel Bevacqui, sixth; Colin Fennelly, 11th; Brendan Magill, 14th; and Jesse Bisbee, 15th.

“It has been a tough October for our boys. Three of the male students that died in the tragedy were close friends with the boys on the team. I am proud of them. They stayed focused and supported each other while physically suffering through some difficult workouts at a very difficult, emotional time,” said Kerrigan.

“They learned in the last few weeks that they are not made of wood or stone, that they are men. I was very proud of their efforts not only today but the entire season,” said their coach.

Harwood boys also qualified for the New England XC Championships to be held in North Scituate, Rhode Island, this weekend.