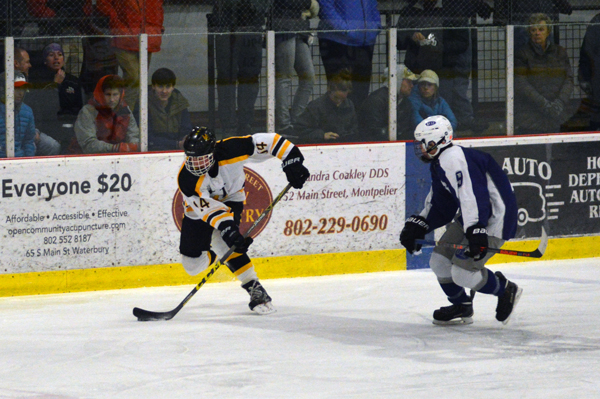 Any hockey fan in search of offense found it immediately at The Ice Center when Harwood boys’ hockey and U-32 combined for five goals in the first period of the game.

Members of both teams finished the night off with hat tricks, Harwood’s Eli Rivers and U-32’s captain Conor Barrett, but it was Barrett's team that came away with the win 5-4.

“I thought in the first two periods we got the puck in the hand of our better players and they're very creative and for two periods we did what we wanted to do. We moved the puck, a lot of shots on goal and rebounds,” Harwood coach Dave Morse said while adding, “and then the third period we got away from it.”

Harwood came out strong, trapping U-32 in their own zone for much of the first few minutes and when their defense failed to clear the puck out of their zone, Harwood forward Reece Anderson capitalized and opened the scoring just 2:17 into the game. That trend did not last for long as U-32’s offense woke up throughout the period.

Just two minutes later U-32 turned the tables and put Harwood into the same position that they had just gotten out of. Lucas Eldred tied the game up, but his line mate, Barrett, wouldn't let him steal the show as he would score 17 seconds later to put the Raiders on top. Barrett did it again 6:46 minutes into the period providing his team some comfort in the lead.

It wouldn’t last for long though as Rivers, one of Harwood’s captains, would go on to score three unanswered goals before the end of the second period.

It was Rivers’ penalty that resulted in Barrett scoring his third of the night and he didn't take that lightly. He took a shot from near no-angle and it deflected off the goalie’s pad to find the back of the net, giving Harwood a needed boost of energy heading into the first intermission.

Keeping the pace of the game high, Rivers took the puck right away in the second period and fooled the goalie up close to put the puck past him glove-side. He would finish his own hat trick 13:50 minutes into the second period, giving Harwood the lead again and they would keep it until the third.

Coach Morse said the best thing about Rivers’ style of play is how he shares the puck to create offense and that was only echoed by Rivers himself.

“A lot of it was just moving it with my line mates and getting it back. In practice we work on that every single night, quick off the breakout, getting the puck, moving it up the ice and just give and gos all the way up and I think that was working well for us tonight,” Rivers said.

Rivers plays on a line with Colin Green and Justin Cantwell and he said they had chemistry on Wednesday night.