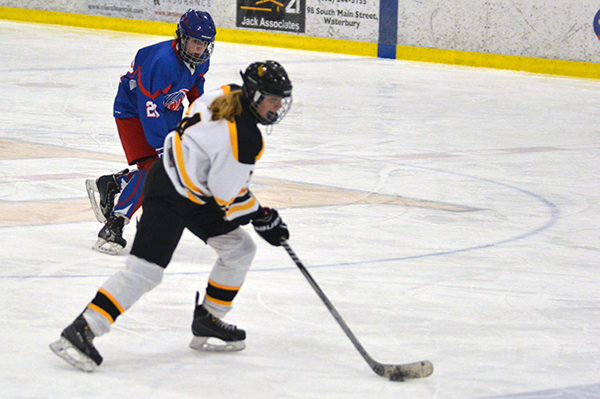 Harwood sophomore April Tousignant scored two goals on January 25 to propel the Highlanders to their first win in January. Late in the first period, Harwood pinned the Hartford Hurricanes in their defensive zone, and as a Hartford defender attempted to clear the puck Tousignant was positioned perfectly to intercept it. Tousignant skated untouched to score the first goal of the game.

The Highlanders went into the locker room with confidence and they kept up the fast pace in the second period. Just two minutes in, the Highlanders were dominating on offense and the puck found its way back to Tousignant right in front of the net and she was able to capitalize once again.

Although she had a few more chances throughout the evening, Tousignant, unfortunately, did not complete the hat trick.

Harwood goalie Alison Yandow stopped every shot she faced and completed her second shutout of the season. The only other shutout came against the same team on December 28, when neither team scored.

Despite winning the game, Harwood coach Mike Vasseur doesn’t believe that he saw his team skate up to their full potential.

“It was good to get the tough luck monkey off our back and finally win one,” Vasseur said while adding that he hopes it will instill confidence in the girls moving forward. He said that the team has more left in the tank and that their best game actually was played in a game they lost to U-32 on January 18.

“The kids played great against a very, very good team. This was a good game, but I don’t think it was our best performance of the year. I know people think that because you got the win it was, but I’ve coached long enough to know that you can play incredibly well and lose, and we have done that,” Vasseur explained.

Vasseur praised Tousignant’s play, not just in last week’s game but the entire season. She has played exceptionally well throughout the year but has just been unlucky on the stat sheet. That was not the case on Wednesday evening.