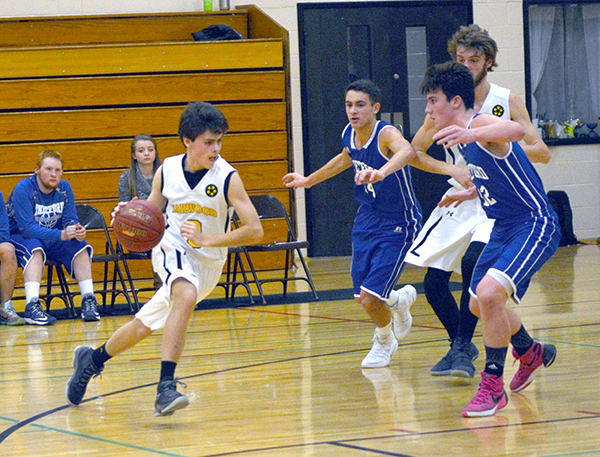 Harwood boys’ basketball team dug themselves into a hole early in the game. They played from behind throughout the first half of the game. The team committed 10 fouls. They allowed Thetford to hold possession and control the pace of the game. At halftime Harwood trailed 16-23.

They came out of the locker room rejuvenated and immediately tied the game. Early in the third period Baron hit his free throw and on the next play, a 3-pointer. As soon as Thetford moved the ball up the court, Harwood’s Jake O’Brien stole the ball back and set Baron up for his second 3-pointer, bringing Harwood even with their opponent.

“We had a tough first half obviously and not a lot was going right, but we knew we just had to play hard and do what we had to do. We just had to come together as a team,” Baron said of the team’s performance.

“I happened to be on the receiving end of a couple good plays we made. It got us right back in the game,” Baron added, downplaying his individual performance and highlighting the work of his team.

The crowd reacted accordingly and grew louder as the Highlanders woke up. Baron compiled an impressive 13 points in the third quarter, keeping the game tied before entering the fourth. Baron scored his last two points early on and the rest of the team took over to ensure the win.

O’Brien hit two 3-pointers and the gym erupted in raucous cheering as he had sunk the Thetford’s chance of a comeback.

Harwood started the season with six games on the road, and Baron said that they did not have the start they would have liked, but the team has been gaining momentum moving into end of the season.