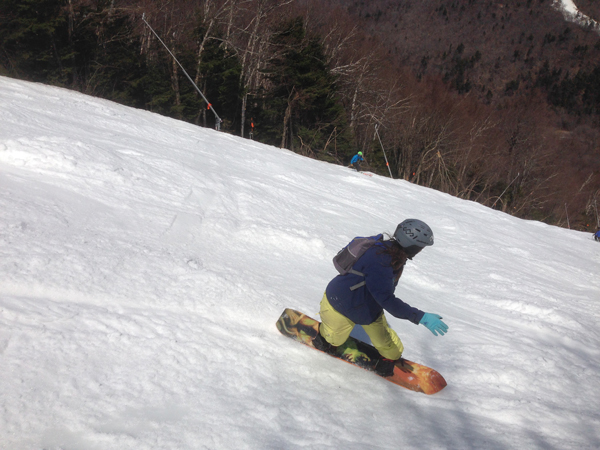 We started with a warm November, in which snowmakers cobbled together just enough subfreezing nights to open Sugarbush on Thanksgiving Day. Then snow fell fast and furious, and Mad River Glen opened December 10, its earliest in recent memory. There was powder just before New Year’s, and a couple weeks of bliss before a dreaded January thaw pulled out the tablecloth.

Things began improving again after Super Bowl Sunday, and a big storm around Valentine’s Day ensured no-vacancies across The Valley for the holiday week. Temperatures soared and spirits were high until the bare spots began to poke through. Who ever heard of a February thaw? Once again our base was reduced to dregs.

Sugarbush made snow in March. Mad River closed midweek. Only a miracle could save the season, and that miracle was named Stella – 3 to 5 feet over 36 hours meant days of freshies and weeks of stable snowpack. And two healthy refreshers at the start of April gave us a corn harvest as we held back the inevitable tide of spring.

I gave lessons to over 50 students this season. Mad River Ski School, Vermont Adaptive, and friends and family entrusted me with skiers of all ages and abilities, and I’m proud of what they accomplished.

Nine stand out. Gabe, a young man with autism whom I coached on Sunday afternoons, found confidence in his parallel turns this year and raced to two silver medals at the Special Olympics. The Magnificent Seven – Angus, Annabel, Jack, Matt, Nova, Trevor and Tyler – are a group of little rippers whose limits I tested every Saturday. And Evan, my 3 1/2-year-old soon-to-be nephew, pretends to be a superhero when he skis and is well on his way to mastering blue squares.

Here are some of my own achievements on skis this winter.

• I topped the 100-day threshold for the second time in my life.

• I enjoyed a half-dozen new lines in The Valley, including two routes through Slide Brook and a friend’s backyard in East Warren. There is so much to discover here.

• I woke up in time for dawn patrol on a powder day – an unforgettable sequence of face shots on Lower FIS.

• I took a monoski lesson.

• I finally skied the 20-kilometer outer loop at Ole’s. I also managed to ski three trail systems in a single day: a morning skate at Ole’s, an afternoon at Mad River, and a $5 night-skiing ticket at Cochran’s.

• I traveled to the mountain by bicycle for a spring outing, carrying skis, boots and poles on my back. It was a little awkward, but nice to prove a car-free ski is possible even after the Mad Bus shuts down.

Here’s hoping you can reflect on the season and find moments that make you proud, too.

Sugarbush hopes to dish out one last helping of lift-serviced turns with its Ski & Tee weekend, in which you can shred bumps and play golf on the same day. After that, the slopes will turn over to skinners who ensure the last lingering snow doesn’t go to waste. Hikers and bikers, please lay low to prevent erosion until Memorial Day. Summer fun is only a month away.

That’s the great thing about seasons: They keep coming back. I never need to say “Goodbye” to winter, just “See you soon!” Or maybe, “See you along the fall line!”