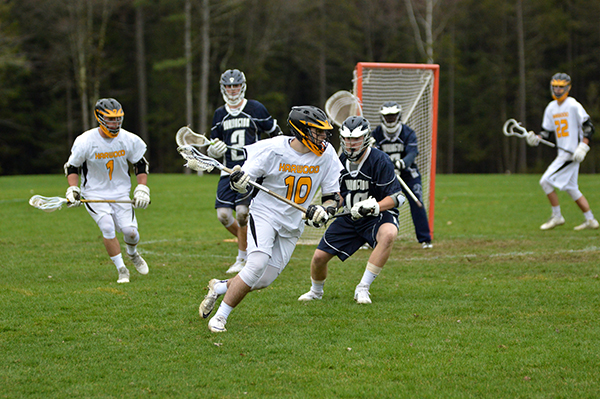 Harwood Union (HU) lacrosse was unable to overcome a stroke of penalties in the second half and dropped their second game of the season to Burlington 7-9.

The Harwood Highlanders were up 5-3 heading into halftime and they looked like a rejuvenated team after having dropped their first game against Green Mountain Valley School. However, the Highlanders got in the way of themselves in the second half.

Harwood accumulated nine penalties in the second half, for a total of 12 minutes, all of which were played man down.

Harwood coach Russ Beilke said, “It’s not how you start, it’s how you finish,” after the game while also noting, “Playing man down is never advantageous.”

He praised Burlington for being such a strong team and he said the message to his team after the game was that “It’s a long season.”

Harwood’s goalie despite the loss still shined as he made 15 saves throughout the game.

Harwood must have regrouped over the course of a couple of days as they would defeat Lamoille two days later for their first win of the season 17-6.

Their next game will be Thursday, May 4, against Lamoille at home.