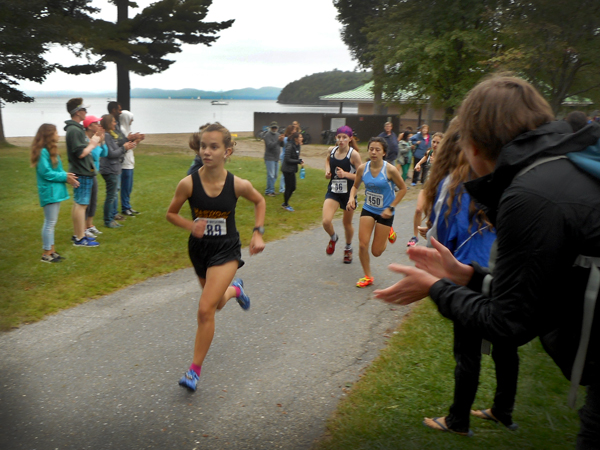 Harwood boys’ and girls’ cross-country teams started off the 2017 season with a strong start at North Beach in Burlington on Saturday, September 9.

The Harwood trio of Brendan Magill (11), Anthony Palmerio (16) and Daniel Bevacqui (18) provided a solid front-of-the-pack finish. They were followed by Seth Beard (34) and Jesse Bisbee (38). This enabled the Harwood boys to secure a podium team finish (3) behind host Burlington and North Kingston, Rhode Island. Harwood led all Division II teams.

Harwood girls had a solid pack near the front – Erin Magill (6), Julianne Young (14) and Jordi Kulis (27) led the Harwood pack. They were followed by Willa Yonkman (53), Katie Ferguson (57) and Maggie Alberghini for a solid fifth-place finish in the 17-team field. The eight-time defending state champion Harwood girls’ team will have their work cut out for them to capture a ninth straight title. Division II rival Middlebury girls finished solidly ahead of the Highlanders.

“The Division II teams are very competitive this year,” said coach John Kerrigan, who is entering his 39th season as head coach of the Highlanders. “Both boys and girls will have to work hard to match finishes from last year.” Harwood boys were second and Harwood girls were first in 2016. Both teams qualified for the New England Championships in 2016.

Sydney Kulis (30), Hadley Kielich (38) and Alexandra Pendo (43) were the top finishers for the Harwood JV girls.

Harwood cross-country runners will compete this Saturday, September 16, at the U-32 Invitational.