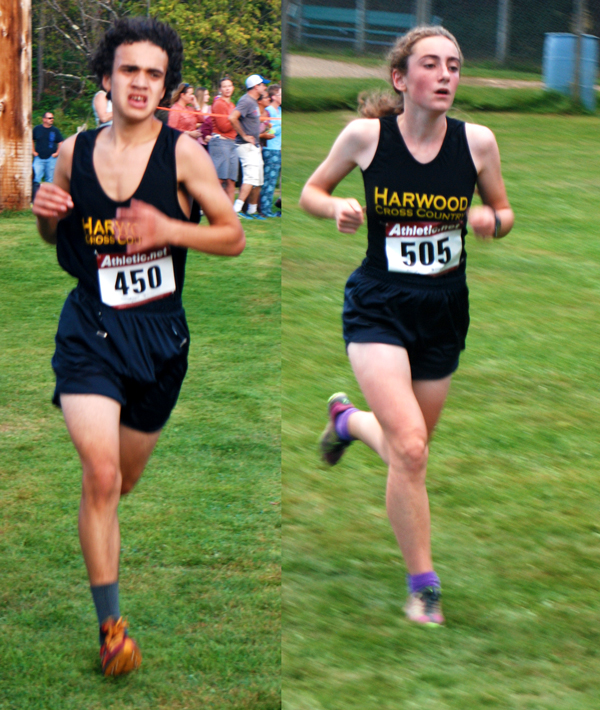 After traveling to New Hampshire and Maine the past few weeks, the Harwood cross-country team had a meet closer to home on Wednesday, October 4, in Montpelier. “We like to travel to the big meets out of state because we get to run against some really topnotch competition,” head coach John Kerrigan said before the meet. “But it’s nice to be close – it was only a 20-minute bus ride. It’s nice to be home. And now we get to see how we’re doing against our local competition.”

They seem to be doing pretty well. The boys finished in first place, one point ahead of Division I powerhouse St. Johnsbury Academy. Daniel Bevacqui paced the boys with a third-place finish in 17:41, just ahead of fourth-place finisher Brendan Magill (17:49) and fifth-place Anthony Palmerio (18:01). Rounding out the scoring were Seth Beard (15th, 18:44) and Jesse Bisbee (16th, 18:46). “Our trifecta of Daniel, Brendan and Anthony just keeps getting stronger,” coach Kerrigan said after the meet. “In any given race, any one of them may lead the team. And the dynamic duo of Seth and Jesse is creeping up on them. The spread time of 1:05 between our first and fifth runner is the best we’ve had all season. I think they will be able to close that gap by another 30 seconds before the season ends. The other two varsity, Luke (Groom, 25th, 19:20), and Walker (Caffry Randall, 26th, 19:23) had strong showings, also.”

“I’m proud of these girls today,” coach Kerrigan said. “We lost some key players from last year, and we’ve been dealing with some injuries for some of our veteran runners. So, we’ve had a youth movement. Maggie is really stepping up to the task, getting stronger every race. Mackenzie runs with some real grit every time she’s out there. Today’s seventh runner, Willa Yonkman (44th, 24:21), was running with a fever, but she toughed it out. Katie (Ferguson, 34th, 23:45) is always pushing to be in the top five. It’s great to have Jordi back out there after a couple weeks of R&R. And, of course, Erin and Julianne are rock solid at the top.”

Assistant coach Ryan Kerrigan said after the race, “We’ve been working hard the past few weeks, so today was a tough race for them. It’s all part of the training. They get some rest now before the final push to states in a few weeks. It’s a pretty impressive result given how tired they were coming into today’s race.”