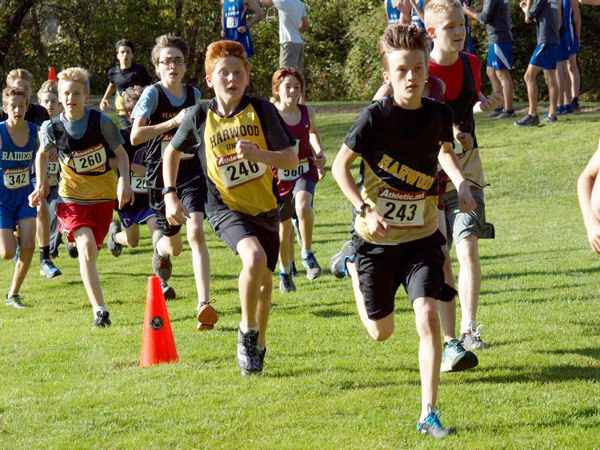 The Harwood Union Middle School cross-country girls took first place with a near-perfect score of 20 and the boys also stood on the podium in second place at the Montpelier Invitational on Wednesday, October 4.

“It is rare to have a team with so much talent continue to push themselves and show up at practice day in and day out,” said coach Lou Bevacqui. “Their grit spoke for itself through their performances.”

The girls were a force to behold as Ava Thurston (first) with a time of 13:14 and Wren Forbes (second) set the tempo. Teammates Caleyn McDonough (fourth), Anna Sanborn (sixth), and Britta Zetterstrom (eighth) secured the victory for the Highlanders. The top seven were rounded out by Anna Alberghini (ninth) and Aliza Levey (14th). This is the third invitational win in a row for Harwood girls.

The Highlander boys, led by Hale Boyden (third) with a time of 12:17 and Zennor DiMario (13th), left it all on the course, using everything they had to jump four places from their last meet onto the podium for a second-place finish. Jack Lamphere (20th), River Collins (25th) and Ben White (32nd) came within 50 seconds of each other and created a wall of black and yellow. The top seven were rounded out by Holden Stephenson (39th) and Cameron Gaidys (43rd).