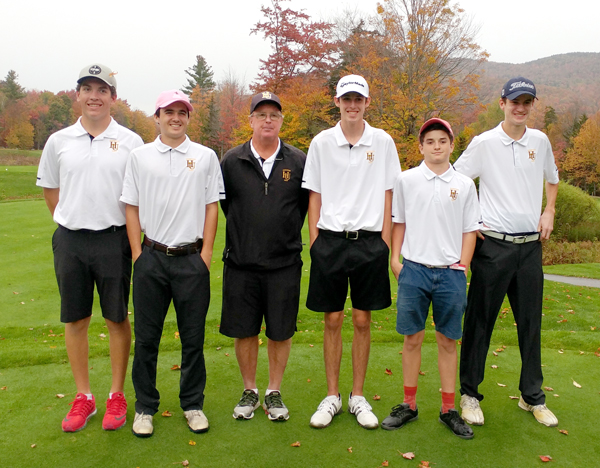 Harwood boys’ golf season is over and the team proved themselves to be not only the best team in their division but throughout the state.

On Wednesday, October 11, the Highlanders teed off at Green Mountain National Golf Course in Killington. Head coach Brian McCarthy said that the boys wanted to come away with the lowest score of the day and they succeeded.

Harwood’s Aidan Melville led the team shooting an even 71. Ivan Morse followed with an 80, Ian Groom shot an 84 and Nate Honeywell brought in a 99 to finish the scoring.

The Highlanders took the division title easily with an overall score of 334. That score, however, would have placed them three strokes ahead of Division I winner Essex High School.

“As a team, we really came together. We had a practice round in miserable conditions and I think it really helped the team bond and get loose to play well on Wednesday,” McCarthy said.

“It meant a lot to the kids when they realized that they had actually beat the Division I schools, too. They took a lot of pride in that and it’s definitely something they worked for throughout the year,” he added.

McCarthy said that it’s rare for a Vermont golf team to have four players that can compete at a high level and that is what propelled the Highlanders to such a successful season. Harwood only lost one match this season, to Stowe, a few weeks before the championship round and McCarthy said he believed it really fired up the team.

Lastly, McCarthy credits the Country Club of Vermont. He said that the team had access to some of the best training facilities in the state, which helped them throughout the year.

Melville and Morse qualified for the New Englands, which will take place in June 2018 at Bretwood Country Club in Keene, New Hampshire.