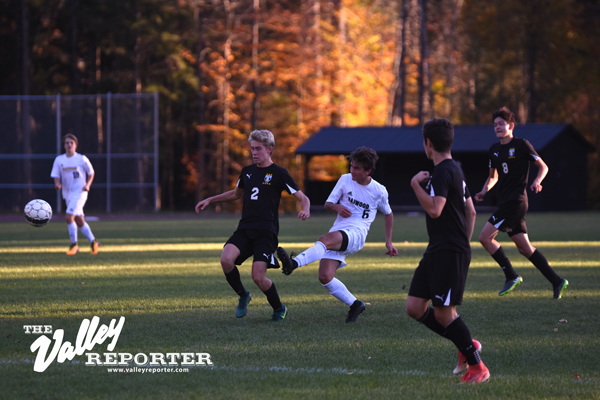 The Harwood boys’ soccer team lost their first game in exactly a month to Stowe, 2-0.

On Wednesday, October 18, the Highlanders let up two goals and were unable to find their way onto the score sheet. Wednesday was not only the first time the team lost, but also Harwood had not given up a goal since September 18.

Stowe’s first goal came from a penalty shot and the second goal came off a rebound from Harwood goaltender Max Hill.

“I don’t think defense was the issue at all,” head coach Don Haddox said. “If you only give four or five shots, I’m OK with that. I think our breakdown was in discipline,” he added.

Haddox said that the team was off positionally and at times emotionally undisciplined, which made it harder for the Highlanders to come back from Stowe’s penalty shot.

On offense, Haddox said slow decision-making was the biggest issue. The Highlanders had scored 10 goals in their previous two games against Lyndon Institute and North Country.

“Once our decision-making slows down the spots that might be a possibility [to score] are even less of a possibility,” Haddox said.

The Highlanders have one more game before the postseason and they are still fighting for home field advantage. Harwood travels to U-32 on Saturday for their final match.