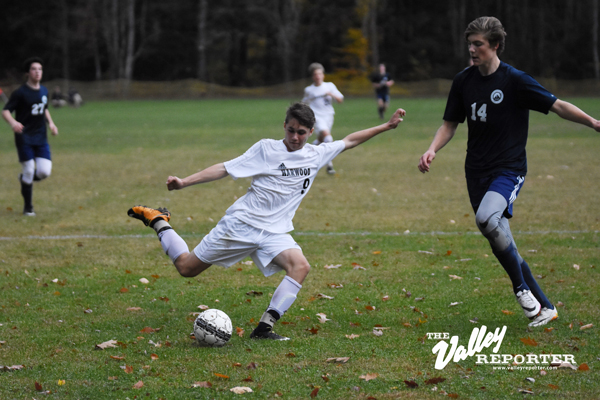 Harwood boys’ soccer was able to hang on to the lead in the second half of their playdown matchup with Stratton Mountain School to come away with a 3-2 win on Tuesday, October 24.

Harwood junior Ely Kalkstein opened the scoring within one minute of kickoff when his initial shot rebounded off the goalie and he was easily able to find the back of the net.

Jake O’Brien scored two more throughout the first half to give the Highlanders a 3-0 lead heading into the second half.

Harwood gave up a goal in the first and last minute of the second half but kept the final score at 3-2.

“We came out hard and fast. We scored in 45 seconds and that’s a big deal. I thought that we played a very balanced, disciplined first half. People had roles and they performed in those roles,” Harwood head coach Don Haddox said.

Haddox said some of the first half could have been helped by Stratton having come off a two-hour bus ride. He also mentioned that the roles his athletes played during the first half broke down in the second half and the Highlanders became much easier to defend.

O’Brien said that Harwood will have to play their roles if they are to be successful in the next round.

The Highlanders will play Hartford in the quarterfinals this Friday, October 27, at Hartford.