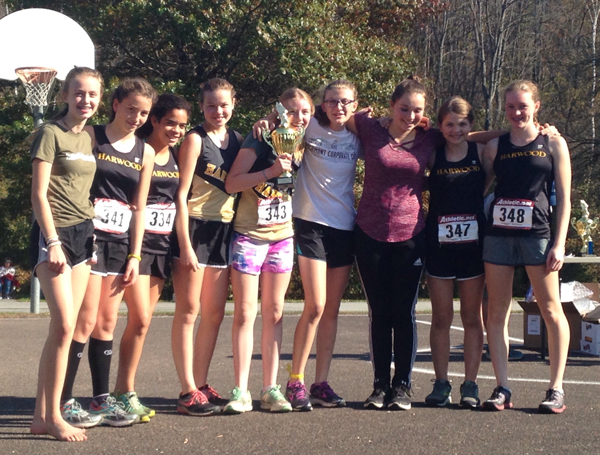 Harwood Union Middle School cross-country girls, undefeated all season, won the NVAC Mountain Division Cross-Country Championship with a near-perfect score of 18 this Saturday in Montpelier. The boys, with several of their top runners battling injuries, willed themselves in front of Stowe’s middle school cross-country team to take second place and another turn on the podium.

“As if our middle school runners hadn't accomplished enough over the last two months, the NVAC's this past Saturday ended up being the perfect stage for our team to show everyone in attendance their passion, dedication and flat-out unwavering tenacity!” said coach Lou Bevacqui.

Ava Thurston (first) in a time of 13:11.7 and Wren Forbes (second) – a mere 0.4 second behind her – cleared a path for the Highlander girls to their fifth victory. They were followed by a wall of black-and-yellow uniforms – Caelyn McDonough (fourth), Anna Sanborn (seventh), Britta Zetterstrom (10th), Anna Alberghini (11th), all finishing within 40 seconds of each other. Aliza Levey (26th) was the Highlander’s seventh runner. Harwood bested Hazen Union Junior High and Montpelier. Hazen Union had a score of 80, 62 points more than Harwood’s 18. A perfect score is 15.

Hale Boyden sprinted past Cormac Leahy of Hazen Union in a photo finish to snag second place in a time of 11:49.5 and started the ball rolling for the Highlander boys. His teammates Zennor DiMario (11th) and Jack Lamphere (19th) tore up the trails behind him, placing within the top 20 runners. The top seven boys for Harwood were rounded out by Ebbe Lillis (23rd), River Collins (26th), Silas Yonkman (28th), and Holden Stephenson (37th). Both Lamphere and Lillis were battling injuries and Yonkman returned after being out most of the season. The only team that bested Harwood was U-32 and Harwood beat Stowe by four points.