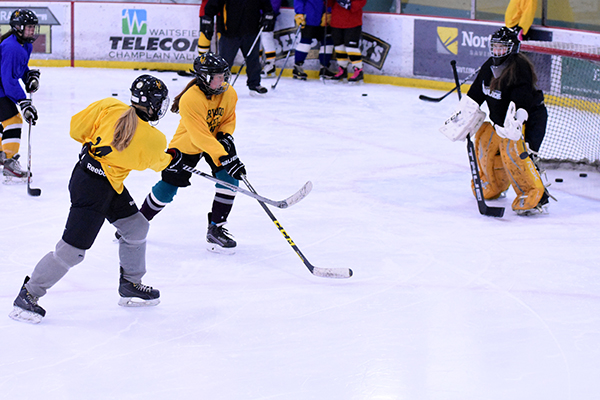 The Harwood girls’ hockey team has an array of talent to work through this year.

On this year’s girls’ hockey roster, there are girls who are brand new to the sport all the way up to what coach Mike Vasseur calls the best Division II defensemen in the state.

“We are rebuilding. We have a couple, two, three, four, five, experienced hockey players, but other that that were brand new,” Vasseur said.

Vasseur said the team lost seven or eight skaters to graduation last year including Ali Yandow, who was an “All-League” goalie.

“That’s a huge gap to fill,” he said. Luckily there are some returning stars on this year’s team including Liliana Ziedens, April Tousignant and Kera Hallam.

It isn’t uncommon for Vasseur to work with athletes who are new to hockey. He said in the past few years he has had skaters that had never played before. There are four players this year that are new.

“We’re just not getting as many kids coming up through Harwood youth hockey that continue to play at the varsity level,” he said.

The challenge for Vasseur is designing practices that will get every player involved but also challenge the elite players that are on the team.

Even more important than that though is to make sure every athlete is having fun playing the sport, something he looks to the leaders of the team to help with.

“This is going to be a year where they have to have a good positive attitude and we have to stick together as a team and be willing to sacrifice for each other if we’re going to see any success at all,” Vasseur said.

The Highlanders will play their first game against Woodstock on Saturday, December 9, at the Ice Center in Waterbury.