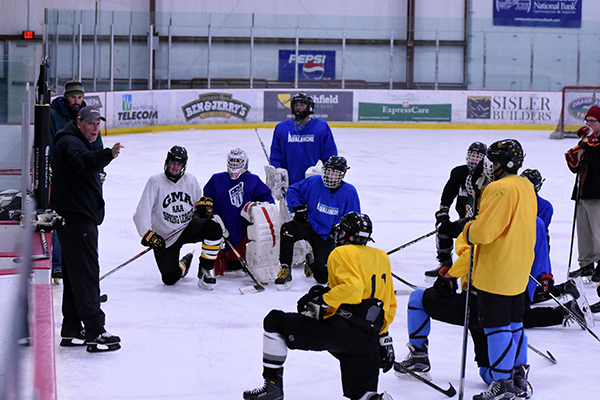 After seven seniors and two juniors left after last year, the Harwood boys’ hockey team will have to bring their young skaters up to speed in order to compete.

Harwood’s boys’ hockey team made it to the Division II state championship last year but fell to North Country.

The team has seven days of practice behind them and they will play their second scrimmage against Hartford as The Valley Reporter goes to press on Wednesday, December 6.

There are 10 returning athletes that the coach, David Morse, will look to in order to help the newer skaters. In total there are 16 skaters, which is fewer than Morse is used to having.

“We’re going to have to do things that we’ve never done because if there are any injuries or illness, which you always have, it’s just a long season, so if somebody gets hurt we have to move kids around and a lot of those young kids, they’re going to be good hockey players, but they’re young. It will take time,” Morse said.

Morse said he has three freshmen and two sophomores that were not on the varsity team last year.

“This team is going to succeed if they play together and they’re going to succeed with 13 people contributing, not one or two. You always have your first line and your second line and all that, but we need everyone to be on the same page,” Morse said.

So, that is what the team is working on in the early season, working together to move the puck rather than one skater taking the brunt of the work.

Morse said the team has been going over systems and working on individual responsibilities through each zone. Most importantly is that they outhustle the other teams.

“We’re fast, but we’re young in places. So, if we can outhustle people and play together, we have a chance to win some games. So that’s what we’re trying to do,” Morse said.