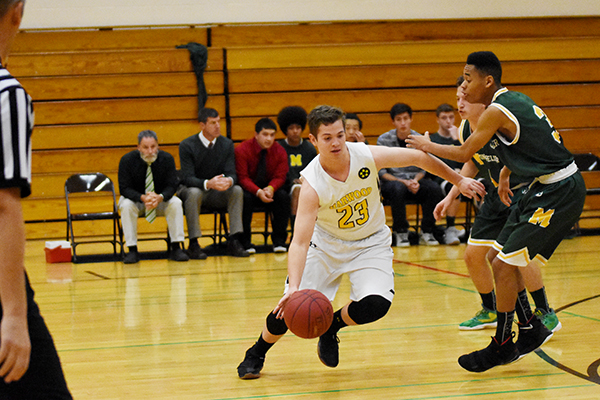 The Harwood Union boys’ basketball team was unable to keep up with Montpelier after the first quarter, dropping their second game of the season 32-59 on Monday, December 18.

Forced turnovers and fouls helped the Montpelier Solons gain a substantial lead in the second quarter. The Solons put a full-court press on the Highlanders and they were unable to move the ball effectively up the court.

“We couldn’t take care of the ball. We talked about it before the game and said that we had to be calm under pressure and we weren’t. They got in our heads early and they never got out of it. Their press got to us, definitely,” said Harwood head coach Mike Woods.

The Highlanders’ most productive player, Ryan Semprebon, came off the bench and is coming back from an injury he sustained earlier in the season.

“He brings a lot of energy and he’s a smart kid, too, so I really like him on the floor. I just haven’t been able to put him on as much as he works back in,” Woods said.

“It was their constant pressure that wore us down early,” Woods explained, adding, “It’s not just the fact that we turned the ball over on the press, but we lost our composure offensively, defensively. We just started making a lot of silly mistakes.”

Montpelier senior Danny Bruce and freshman Leo Riby-Williams led the scoring for the Solons with 14 points and 12 points, respectively.

“We played with a lot of energy like we have all year and we really improved our defensive presence and our work on the boards was really good tonight,” Montpelier head coach Nick Foster said.

Harwood’s next game is Thursday, December 21, at Hartford.