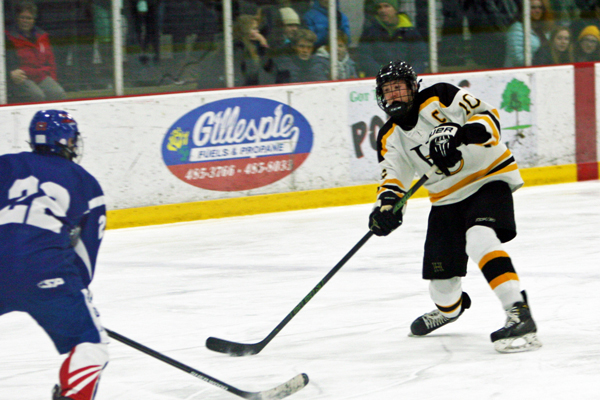 Two Missisquoi Valley Union (MVU) goals in the third period sank the Harwood Union hockey team’s hopes of starting their season off with a win.

The Highlanders fell 3-2 to MVU on Wednesday, December 13, on home ice.

“We got away from our game plan in the third period. For two periods, they [MVU] didn’t have that many good shots in the first two periods. In the third period, we just tried to carry the puck through the middle of the rink and they stole it and had odd man rushes one after the other,” Harwood coach Dave Morse said.

The Highlanders started the game strong. Hunter Wimble scored 2:49 into the first period for the first tally of the game. Unfortunately, MVU’s Braylen Parent evened the score two minutes later with a power play goal.

Harwood’s Jake Cantwell took it upon himself to take the lead back. Cantwell broke through the neutral zone and took a pass from Reid Spaulding. All alone in front of the net Cantwell deked right and tried to put the puck between MVU goalie Logan Labelle’s legs. His first shot was blocked but Cantwell turned back quickly to net the rebound.

Missisquoi got the better of the Highlanders’ defense in the third period though. Missisquoi tied the game up early in the final period and took the lead for the first time with under five minutes to play.

Missisquoi had a more formidable defense than Morse had expected and in the third period MVU was doing exactly what Morse wanted to see from his athletes, dumping the puck deep into the attacking zone and getting rebounds off the goalie.

A few times throughout the night Highlander forwards missed the net with no defenders in the area. When you work hard to get a shot you have got to capitalize on it, Morse said.

Morse also noted that he needs his team to play as one unit.