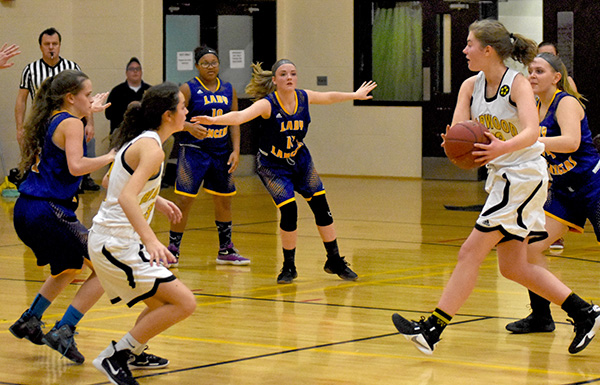 Harwood Union girls’ basketball fell to Lamoille 44-27 on Tuesday, January 16, after the Lancers put on a fourth-quarter rally.

“Lamoille is a great team; we have a tremendous amount of respect for them. I think their guard Peck is one of the best in the state,” Harwood head coach Tommy Young said.

The Highlanders kept with the Lancers for nearly the entire game. Young noted that it was a seven-point game until the final two minutes.

“I was really happy with our zone [defense]. To hold them to 15 in the first half was a good accomplishment for our team,” Young said. Tuesday’s game was in stark contrast to the opponents’ matchups last season, in which Harwood lost by about 60 points.

“We got tired at the end. I think part of the problem was that we only had eight [players] altogether tonight but they can keep coming. They can push and push, they’re a deep team and their well-disciplined,” Young noted.

This is Young’s second season as head coach and he is happy with the girls’ progress. He said Tuesday’s game was the best 48 minutes he had seen his team play.

“People are buying into what we’re trying to do. They’re pushing themselves in practice, but what I really like is they are supporting each other; they’re learning it’s OK to question each other and coach each other,” he said.