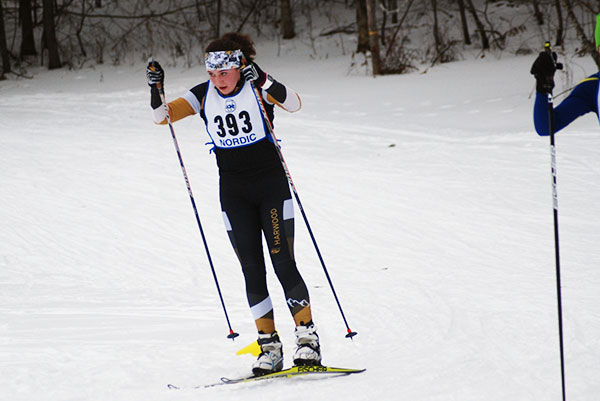 What a strange winter it has been so far. This is the first time in recent memory that high school Nordic practices and races have been repeatedly canceled due to extreme cold. Despite having only two scrimmages and one official race in December, the Harwood Union High School Nordic team remained dedicated and made good use of the school’s weight room.

Tyler Skroski and Walker Caffry Randall won the varsity boys’ skate relay in the season opener on a very cold night at Colchester on December 21. Jordi Kulis and Kyle Marie Hekeler were the second-place team in the varsity girls’ skate relay. For many JV and middle school skiers it was the first time they ever raced. Coach Tom Strasser said he was proud of everyone’s efforts.

Early January there were two more cancellations. Finally, last week, two races were held. At U-32 on January 15, the top skiers were Jordi Kulis and Erin Magill in third and 13th in the girls’ varsity skate race and Walker Caffry Randall and Tyler Skroski were HU’s top varsity boys in 15th and 16th. All the boys chose to ski in the varsity race giving them a chance to see how they stacked up. Cam Alberghini was 35th, with Seth Davidson and Brendan Magill in 45th and 46th, and the remaining skiers pretty tightly behind them.

In the girls’ JV race, freshman and sophomore girls were strong and closely grouped at U-32 showing the future of the girls’ team with Ayla Oshkello, Taite Plagge, Sarah Kate Smith, Julianne Young, Emma Caffry, Hadley Kielich and Olivia Schmaltz coming between 10th and 24th.

Friday, January 19, the team traveled to the National Guard Range in Jericho for one of the most interesting races of the season – a combination classic and freestyle race known as a Continuous Pursuit. The change of equipment midrace is always fun for spectators to watch as the skiers sprint into the stadium area under the lights and change skis as quickly as possible. In the varsity pursuit races, the entire field competes in the classic leg, but only the top 30 go on to the skate leg, so the classic leg can be pretty rough as some skiers are very aggressive in trying to make the top 30. For the varsity boys, Tyler Skroski and Walker Caffry Randall made the cut and finished in 18th and 21st, respectively. Cam Alberghini, Brendan Magill and Seth Davidson gave it a heroic go. For the varsity girls, Jordi Kulis and Erin Magill made it into the final leg finishing 13th and 24th and sophomores Anna Jamieson and Sydney Kulis were not far back from the cut. They are primed to be in the top 30 next season.

Carlton Cummiskey was fifth and Acme Wasi was 22nd for JV boys in a field of 72 skiers. There was a strong contingent In the JV girls’ race with Mackenzie Greenberg third, Camille Sweet 15th, Maggie Alberghini 16th, Taite Plagge 33rd, Julianne Young 41st, Sarah Kate Smith 44th and Hadley Kielich 59th in a crowded field of 83. There were big pileups in both races shortly after the start on the first big downhill which the JV skiers endured very bravely.

The team is finding its rhythm and the skiers are looking forward to three days of racing Tour de Chittenden Stage Races starting today, Thursday, January 25.