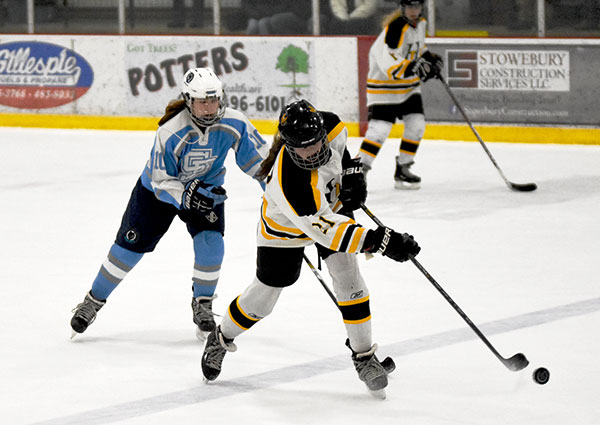 South Burlington came out scoring three goals in the first period before the Highlanders were able to find their way onto the scoreboard. Kelly Baird scored the first goal for Harwood. Unfortunately, it was followed by three more from South Burlington.

“We just didn’t appear to show up emotionally for the first period and that’s always challenging, and we’re a team that, we don’t have a ton of players that have six, eight or 10 years of experience, so we have to play on intensity, for each other, as great teammates,” Harwood head coach Mike Vasseur said.

Vasseur noted that the entire team has progressed throughout the season, despite not having won a game yet, and he explained that he is happy with how the team has been playing.

South Burlington is one of the top teams in Division II. They scored four more goals in the second period and then Harwood’s Emma McGeorge redirected a pass from Lilianna Ziedins into the net.

“Moving forward they just have to come with a ready-to-do intense play every game. We just don’t have the talent that surrounds our team to take a period off here or a period off there,” Vasseur said.