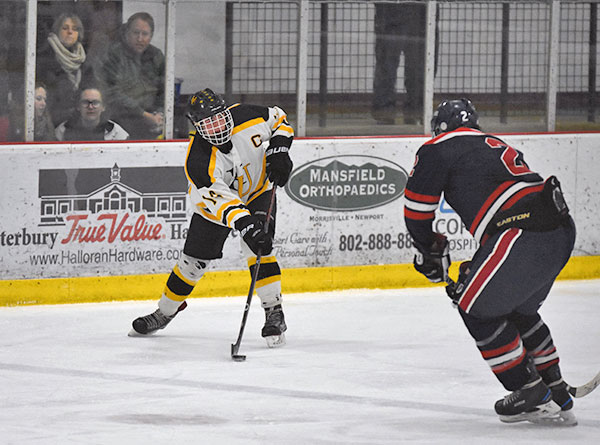 Harwood’s Sean Russell allowed two goals in the Highlanders 4-2 win over Hartford on Monday, January 22. By most measures that’s a low figure, but for Harwood it’s a lot.

That’s because Harwood’s strength relies in its team defense and the Highlanders rarely give up more than two goals in a game.

“Last year we were a terribly talented offensive team and we ignored defense. The kids did as much as we preached about it, so you know if you can’t score six or seven goals a game … and this year we knew we didn’t have that much offense so we concentrate on team defense and by doing that we don’t score as many goals,” head coach Dave Morse said.

Though Harwood gave up the first goal in the second period on Monday evening, it didn’t take long for the team to come back.

“Eriks Ziedins just kind of put us on his back in the second period. He scored two goals with hard, hard work,” Morse said.

Ziedins scored two goals, one on a rebound, which put Hartford’s goalie woefully out of place, and his next goal came on a feed from behind the net from his line mate, Colin Green.

Morse said that the team didn’t come out in the first, sticking to the game plan, but as soon as the Highlanders started to put shots on the net they were able to take advantage of rebounds, which has been their goal all year.

Morse explained that without the high-powered offense of last year’s team they have been trying to win games 2-1 or 3-2. So far it has been working. Harwood is the second ranked team in the division as the team enters the end of the regular season.