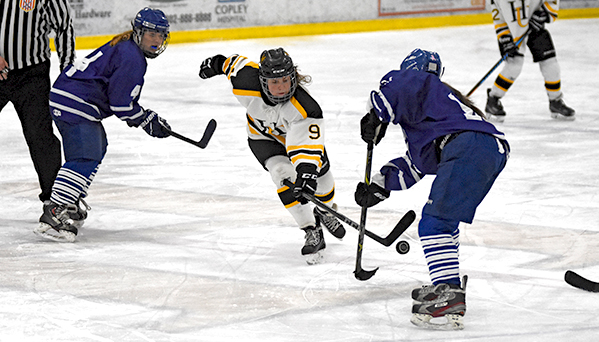 Harwood defeated Hartford 4-2 on Saturday, January 27, to mark their first win of the season. After the team’s 4-0 loss to MVU on Monday, January 30, head coach Mike Vasseur took solace in staying with one of the best teams in the division.

“I thought, all in all, we had some scoring opportunities, didn’t score, I thought we played well as a team. They are the second or third best team in the league. I thought we stayed with them for the majority of the game,” Vasseur said.

The Highlanders had, numerous times throughout the game, a few power plays in which the team was able to control the puck and the pace of the game, but they were unable to find the back of the net.

“We’re looking for the perfect shot, which doesn’t come, so we wait and wait and wait until we shoot and then we hit something, but it’s not the net because by then everybody’s come together,” Vasseur said.

Vassuer said that the players should be more comfortable taking more shots, rather than waiting for the perfect time, and getting the puck to the front of the net to rebound.

The Highlanders’ next game is Wednesday, January 31, at South Burlington as The Valley Reporter goes to press.