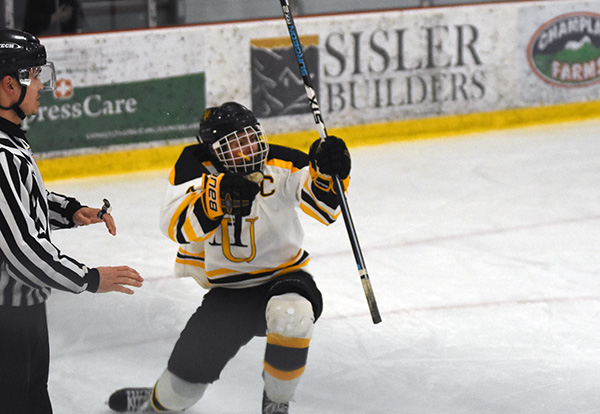 Hunter Wimble completed a hat trick in the second period and added one more in the third period to lead the Highlanders to victory.

Harwood started slow letting up the first goal halfway through the first period. After the Highlanders’ Erik Ziedins tied the game up early in the second period, it took NCU less than a minute to answer, to go up 2-1.

From then on, however, Harwood took control of the game. The Highlanders scored four goals in two minutes, three of them coming off of Wimble’s stick and the other from a long slap shot from Reece Anderson.

“We showed up thinking we didn’t have to play, that we’re going to walk all over them. So, in the first period we were very selfish; that’s the only word … and then we came out in the second period and played hockey like we can play,” Harwood head coach Dave Morse said.

Wimble, Jacob Wells and Jacob Cantwell all added goals in the third along with one more NCU goal to make the final score 8-2.

After the first period, it was hard for North Country to keep the puck in their offensive zone; however, they spent a limited amount of time with the puck.

Harwood advances to the quarterfinals on Saturday, March 3, at The Ice Center in Waterbury at 1 p.m.