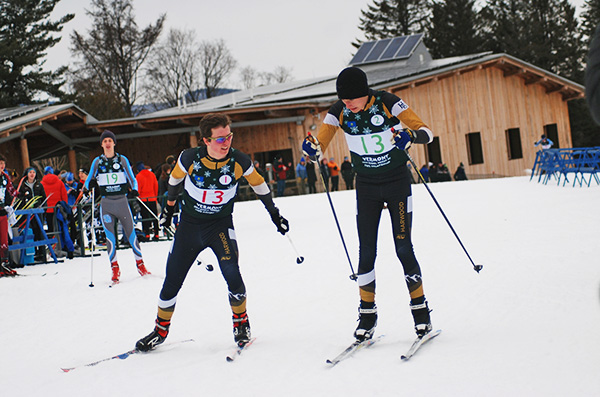 After the first day of states the Harwood girls’ team is in third place in Division II, based on the scoring positions of the top four individual skiers and the four-person relay results. In the individual races, Jordi Kulis had a podium finish in third (16:36) The other scoring girls were Erin Magill in 14th (18:28), Kyle Marie Hekeler in 15th (18:36) and freshman Makenzie Greenberg in 17th (18:44). They were followed by Sydney Kulis in 21st (up 16 places from last year), Maggie Alberghini in 36th, Hadley Kielich in 44th and Taite Plagge in 45th.

The girls relay had a podium finish coming in third. Coach Tom Strasser reported that “Jordi Kulis' first leg of the relay was electric, right from the start she led the 16-team field up and out of the stadium. The awesome start put the team in the position to reach the podium.” Earning a medal was particularly sweet for senior XC state champion Erin Magill who has scores of medals from XC running, freestyle skiing and even spelling bees, because this was her first medal in Nordic skiing. Kulis and Hekeler are no strangers to the Nordic podium but were happy to be there again and the team expects to see Greenberg on the podium again throughout the remaining three years of her HU Nordic career. It will be exciting to see what these girls can do in the second half of states when the classic  races are held at Rikert.

After the first day of states, the boys’ team is in a fifth-place tie with Stowe. They came in seventh in the relay and had some very strong individual finishes. Walker Caffry Randall moved up 12 places by skiing 2 minutes and 15 seconds faster than last year to lead the team with a 16th-place finish (15:15). Tyler Skroski also had an improved finish over last year at 21st (15:49). Coach Strasser was impressed that “Caffry Randall and Skroski skied sub-16-minute 5Ks which is pretty darn difficult to do on a World Cup-certified Nordic ski course. These senior boys had Harwood’s fastest times of the day due to their impressive levels of fitness brought about by four years of hard work and dedication to running, training and skiing.”