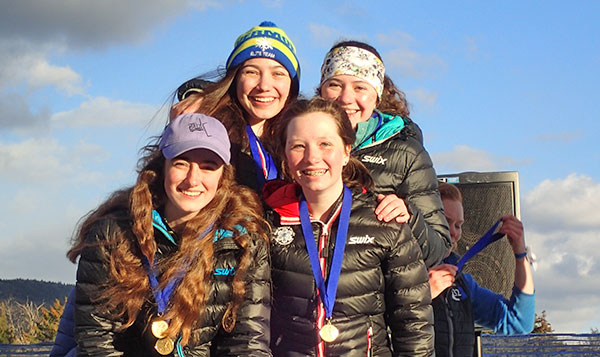 Harwood Union High School Nordic skiers wrapped up their season when the second day of the state championships was held at Rikert Nordic Center in Ripton on February 26.

The Harwood girls were very successful with three girls placing in the Division II top 10 for the individual 5K classic race. Jordi Kulis won the race in 16:24.3 making her the DII state champion in classic skiing. Coach Tom Strasser is “so proud of Harwood's state champion. She deserves the success given the amount of time she has dedicated to Nordic skiing during the past four years.” Also finishing in the top 10 were Erin Magill in seventh (18:33.1) and Kyle Marie Hekeler in 10th (18:50.6). Rounding out the scoring skiers was Sydney Kulis in 21st (20:50). Harwood’s other girls, all skiing in the states classic race for the first time, were Mackenzie Greenberg in 27th, Hadley Kielich in 40th and Taite Plagge in 44th.

Although it was not a day of rain and slush like last year, the day was warm and the course conditions changed quickly making it difficult to get the kick wax right. The boys’ team members had to fight their way up each hill as their skis did not hold underneath them, but they each made the best of it and skied with all they had. Walker Caffry Randall was the first Harwood skier in the boys’ classic 5K coming in 24th (18:32.2). Brendan Magill was 28th (18:32.2) and Tyler Skroski was 29th (18:33.6). All three skiers improved their places in the standings over last year. Acme Wasi, making his first appearance in states this year after three and a half seasons as a JV skier, impressed his teammates by coming in 39th (19:42.5) as Harwood’s fourth scoring skier. According to coach Strasser, “Acme Wasi’s Nordic career at Harwood is truly one of hard work and dedication.” Harwood’s other varsity skiers were Cam Alberghini in 42nd, Carlton Cummiskey in 43rd, Seth Davidson in 54th and Mason Berry in 56th.

The relay team of Caffry Randall, Magill, Skroski and Wasi came in eighth place. Thanks to their stronger results on first day of states, the Harwood boys’ overall place was fifth.

Three skiers from the girls’ team and five from the boys’ will graduate this year, but the remaining skiers all showed improvement this year and there are some very strong skiers coming up from the middle school. The Harwood Union Nordic team is looking forward to a good season next year.