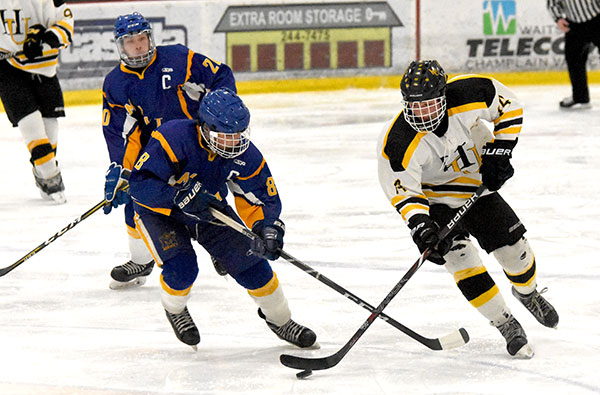 Harwood boys’ hockey fell to Milton 1-0 in the Division II quarterfinals on Saturday, March 3, in the lowest scoring yet one of the most exciting games of the Highlanders’ season.

The Highlanders and the Yellowjackets were trading scoring chances throughout Saturday afternoon until Milton’s Owen Perry finally found the back of the net with just 1:20 left to play in the final period.

The Highlanders were close to killing off a five-minute penalty and were at the tail end of nearly six minutes of man-down defense when Perry snuck the puck behind Harwood goalie Sean Russell.

“I am really proud of the way they played,” Harwood head coach Dave Morse said. He said that the Highlanders played one of their best games of the season on Saturday.

“We put pressure on [the players] to play the way they played the other night against North Country, against a really good team, and I thought for two and a half periods we were the better team. We just couldn’t get it past their goalie. He had some saves that were just highlight-reel saves,” Morse said.

Morse noted that it was hard for the team to cope with two penalties, one being a five-minute major, late in the third period.

“The five-minute penalty killed us, because we were tired at that point anyway. We took the timeout; there’s nothing you can do. I mean you throw the best shot you can at it. We never got a bounce; even the goal they scored was a bounce right to the kid,” Morse said.

“When you stay in a close game as long as that, things can happen good and bad. We’ve had good breaks like that too,” Morse said.