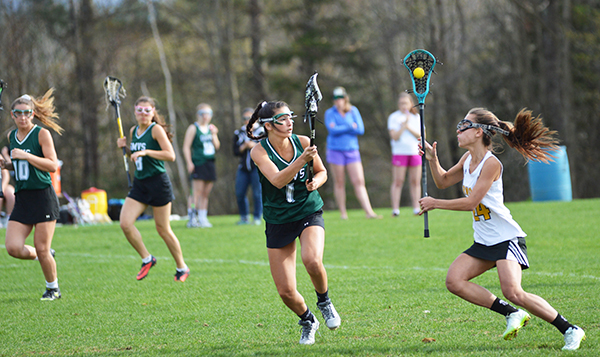 Although this is Drew Simmons’ first year coaching the girls’ lacrosse team at Harwood, he is very knowledgeable about the sport and of the program.

Simmons has a daughter on the team this year; he was the director of Mad River Youth Lacrosse prior to this season and he has coached nearly every age group from youth to college.

“It’s a remarkably talented team with some great senior leadership as well as some underclassmen that undoubtedly make huge contributions this year,” Simmons said of his new squad.

So far the team has been spending most of its time in Harwood’s basketball gym, but they were recently able to scrimmage Stowe on their turf field inside of their ice arena.

“Playing in a basketball court is not ideal for lacrosse. It will do, but playing on the turf was great,” Simmons said.

He noted that he doesn’t really worry about strong or weak points at this point in the season because there will inevitably be such strong improvement from the whole team.

“Right now I’m trying to really look at the strong, raw materials we have at the moment and figure out the best way to apply that,” Simmons said.