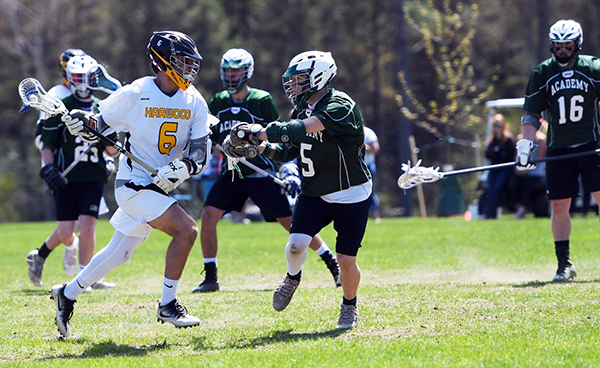 Harwood’s lacrosse team took Hartford to task on Monday in what was supposed to be a game against one of their toughest competitors in the division.

The Highlanders remain undefeated at 10-0 and in the past week they have defeated the two teams behind them in the standings by huge margins. First, they beat Stowe 15-5 and on Monday, May 14, the Highlanders took down Hartford 20-4.

Harwood offense was a force that Hartford’s defense simply couldn’t handle and when they finally did receive scoring opportunities, Highlander goalie Sully O’Hara made the saves look easy.

“We have all the potential in the world; we just have to meet that potential,” Harwood head coach Russ Beilke said.

Beilke said that the team could continue to improve at the face-off dot. Many of the players are stepping into the role after not having taken face-offs for a long time.

Defensively, Beilke said he has been impressed with the team’s play, both long-pole defensemen and Harwood’s midfielders.

What might be more impressive than the win was a milestone reached by team captain Connor Woolley. Halfway through the first half Woolley scored his third goal of the game and Beilke rushed onto the field to take the ball.

It was Woolley’s 200th goal of his career.

Beilke said that Woolley’s growth has been both physically and mentally.

“Kids look up to him maybe because of his ability, but this year he’s taken that a step higher by performing leadership duties all over the place,” Beilke said.